I won’t be blogging for a while, as Saturday morning I’m off travelling again. The destination this time is the Rhineland city of Düsseldorf. This will be my third trip in as many months to Germany, and my third major city within the country.

Son Matthew and I will be joining a group of fellow beer lovers from Maidstone CAMRA; although I hasten to add this is not an official CAMRA trip. This will be my second outing with the group, as two years ago I travelled with them to the town of Jihlava, in the Vysočina Region of the Czech Republic. That particular trip consisted of brewery visits and sight-seeing in equal measure, and we certainly travelled through some of the most pleasing countryside I have seen; with rolling hills, dark forests and stretches of verdant green pasture.

The Düsseldorf trip, of course, will be a lot more urban in nature, but the tour organiser has a number of brewery visits lined up for us; including one in Cologne, where we’ll be spending the second full day of the trip. Düsseldorf is famed for its Altbier; a copper-coloured, top-fermented beer, brewed in the “old” or “alt” style. It is also served in 30 Cl cylindrical glasses, similar to those used for Kölsch in the neighbouring, and rival city of Cologne.

There are some classic pubs to visit, and from what I’ve seen we’ve got a full itinerary to look forward to. Matthew and I are flying out a day ahead of the main party, so we’ll have time for a spot of sight-seeing and some shopping before the rest of the group arrives. 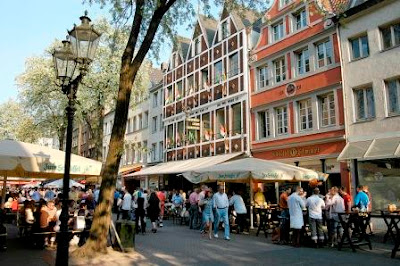 It will be my first visit to Düsseldorf, although I have been to neighbouring Cologne on five separate occasions. It will be Matthew’s first visit as well, and will provide a chance for him to see and experience a part of the country which is very different from Bavaria. If nothing else, it should demonstrate just what a diverse nation Germany is; a diversity which expresses itself in beer as well as many other things.

I must say it will be nice to get away for a few days, and nice also to get away from a Brexit Britain obsessed with meaningless slogans (“strong and stable”, “control of our borders”). Most Germans I spoke to on my last trip, thought the UK had taken leave of its senses. As a nation which knows only too well what happens when the extreme right is allowed to bully and lie its way into power, I tend to think they know what they are talking about!

A full report of course, plus some photos, when I get back.
Posted by Paul Bailey at 22:29

I'm sure you'll have a great time. I've been to Düsseldorf numerous times and it really is one of the world's, never mind Germany's, top cities for beer drinking, with some classic, unspoilt pubs in the Alstadt which you'll no doubt visit, Zum Uerige probably being the best of the lot.

Thanks Matt. I’m sure we’ll be visiting Zum Uerige, alongside some of the other unspoilt Altstadt pubs. A full report will follow on my return.