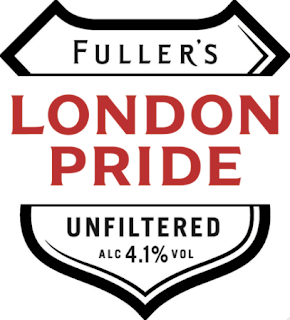 I’m a little surprised that other writers haven’t picked up on last week's launch, by Fuller’s of an un-filtered, keg version of their flagship ale, London Pride. Described as the company as “the biggest beer launch in a generation”, Fuller’s have unashamedly pitched the new beer at the burgeoning “Craft Beer” market, and believe the new version of London Pride will open up the brand to younger consumers.

London Pride Unfiltered is brewed to the same recipe as cask London Pride, and maintains its current 4.1% ABV. It is then dry-hopped with Target hops for “added character and flavour”, before being centrifuged. The beer is not filtered or pasteurised, and Fuller’s claim this will maintain the taste, complexity and character of the beer, and will leave it as “natural as possible.”

This new variant on a classic beer, will be delivered in 30 litre kegs, and will be served at a teeth-numbing 4 - 6 degrees centigrade (ouch!). The result is a hazy, hoppy, tasty beer in a keg which, according to the company, “Will deliver the quality and flavour consumers expect from a Fuller’s beer.”

London Pride Unfiltered was launched at Craft Beer Rising, in the former Truman Brewery in London’s East End. It marks the first time, since its launch in 1959, that the London Pride name and recipe has been used to diversify the range, and offer a markedly different interpretation to Fuller’s best-selling cask ale.

Using typical marketing speak, a spokesman for the brewery said, “London Pride in cask is a truly great beer and cask ale is and always will be the backbone of Fuller’s beer range. Our excellent brewing team has taken the same great recipe and, by dry hopping the beer at the end, created a beer, in keg, that has balance, flavour and is true to the character of any Fuller’s beer.”

Fuller’s head brewer, Georgina Young, added: “Like London Pride, it still tastes great when you are on your third pint and it’s creating this balance that takes real skill. By only using a centrifuge, we get a hazy beer but retain additional flavour, to give London Pride Unfiltered more of the traditional character that you have in the cask beer than in the conventional London Pride keg version. I’m sure that even those with the hoppiest of taste buds will appreciate such a beautifully smooth and tasty addition to their repertoire.”

I’m not sure what’s meant by that last sentence, and I’m not sure about the whole idea. For starters, it seems strange to leave the beer looking hazy, as surely centrifuging should remove suspended yeast and proteins? I suspect the haziness is a deliberate ploy, to appeal to craft aficionados, used to cloudy pints, and I do question the science behind this.

Before condemning the new beer out of hand, I will at least try a few pints; even though 4 - 6° C is rather on the chilly side for English ale! So if Fuller’s want to invite me for a comparative tasting, they know where to find me!

A brewery centrifuge won't get beer completely bright. They're normally used as well as, not instead of, filtration.

A brewery centrifuge won't get beer completely bright. They're normally used as well as, not instead of, filtration.

Thanks for enlightening me on that, Ed.

Not losing any sleep over this - looks destined to be a very niche product.

Just curious - why both? Isn’t filtration enough on its own?