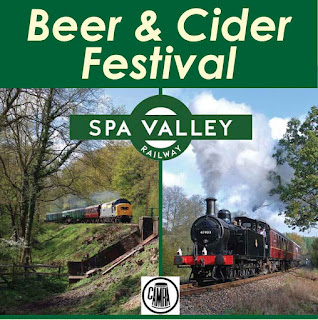 This coming weekend 23rd - 25th October, sees the 5th Spa Valley Railway Beer and Cider Festival taking place. This now annual event is a joint venture between West Kent CAMRA and the Spa Valley Railway (SVR), who operate the preserved railway which runs down from Tunbridge Wells West station, to Eridge. The latter station is on the mainline between London Bridge and Uckfield, and is jointly operated with Southern Trains.

This festival is more complicated than most because as well as there being beer available at SVR’s Tunbridge Wells headquarters, there  is also a selection of different beers further down the line at both Groombridge and Eridge stations. To complicate matters further there is also beer on sale on the trains which operate up and down the line.

Unlike previous years, when I was heavily involved with the organisation and running of the event; an involvement which included selecting and buying all the beers for the festival, I have taken a back-seat role. I haven’t been along to any organisational meetings, and neither have I assisted with setting up and looking after the beer. I will however, be going along on Saturday evening (normally the busiest session of the festival), to lend a hand behind the bar.

I therefore can’t tell you that much about the festival, apart from saying that the beer order has been increased to 100 different beers. The vast majority of these have been sourced from local brewers; and by local I mean Kent, Sussex and Surrey. There will be a strong focus on Green-Hop Beers, with this promotion carrying on from the recent Kent Green Hop Fortnight. I understand there will be around 20 of these special beers, all brewed using hops harvested fresh from the bines, and used within 12 hours of being picked.

One new addition to the festival, which is well worth mentioning, is that people, who operate the highly successful Fuggle’s Beer Café in Tunbridge Wells, will be taking over the refreshment car on one of the trains and offering a selection of craft keg beers, dispensed from Key-Kegs. This means even more variety and choice for visitors to the event.

Train enthusiasts too will be in raptures over the different diesel locomotives that will be operating up and down the line, because the festival is also billed as the SVR’s Autumn Diesel Gala. Diesels leave me cold; give me a living, breathing steam engine any day - but each to their own. The SVR people obviously know their stuff and diesels, apparently, are what pack the punters in.

Since its inception, this festival has always been a logistical nightmare, both in terms of ensuring all points of sale are adequately stocked and suitably staffed, but also extremely difficult when trying to forecast the likely demand for beer. Entrance to the main site at Tunbridge Wells West is free, which means the Spa Valley have no idea how many people attend each year. They know how many tickets they sell for the trains, but many of those enjoying the ride along the line are enthusiasts who have turned up because of their interest in preserved trains, rather than to enjoy the many and varied beers on offer. Those arriving at the other stations will equally not be counted, unless they have bought a ticket, but even then not everyone gets off at these stops, or wants to buy a beer. These factors all combine to make the job of estimating the amount of beer needed at these intermediate stops doubly hard.

Fortunately, none of this is my concern. Instead I will just turn up on Saturday evening, do my stint behind the bar, sample a few beers, if time allows, and then catch the train home to Tonbridge. 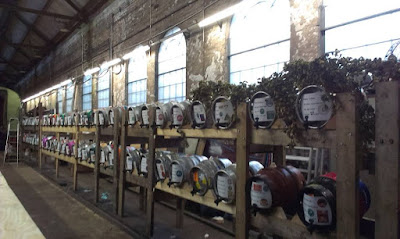 I appreciate this is rather short notice, but do try and come along if you can. Surely there can’t be many better ways of spending a damp, autumn weekend than sampling a few of the excellent range of beers on offer at the festival, especially when there’s the added attraction of riding up and down this preserved line, through the glorious Kent and Sussex countryside which lies between Tunbridge Wells and Eridge.

Further details of the beers and ciders, opening times, train timetables and fares can be found by clicking here on the SVR website.

Usually, I never comment on blogs but your article is so convincing that I never stop myself to say something about it. You’re doing a great job Man, Keep it up.
best spa in Mumbai,
spa Bandra,
the best spa in Bandra West,
that spa Bandra west,

really Nice Article, The way things are represented in the article is really awesome.
There is one more Best Spa in Bandra ,Mumbai. Its the best way to relief yourself from all the type of stresses and tiredness whether it’s of a busy hectic day or its of weeklong full of challenges and hard word Its always worth time.