Something New Just Popped-Up in Tonbridge

I’ve written about this before and probably on more than one occasion, but Tonbridge is crying out for a decent pub. I’ve lived in the town now for over thirty years and have seen the closure of several Tonbridge pubs and witnessed the slow decline of many more. Fortunately the south end of the town, which is the part where I live, still has a sprinkling of half-reasonable pubs which is more than can said for the north end of Tonbridge. Here just two remain from the six which once graced this newer part of the town.

The pubs which are left are, by and large, owned by one or other of Britain’s two main pub chains - Enterprise or Punch. As such they tend to stick to a “safe formula” offering tried and tested beers, quiz nights or Sky Sports.

There’s nothing wrong with that of course if it’s what people want, and whilst this may apply to the majority of the town’s remaining pub-goers there is a substantial minority to whom such a package holds little or no appeal. I include myself amongst this group, and the fact that a minority of disgruntled would-be pub-goers does exist in Tonbridge was demonstrated on three nights last week and three this week. 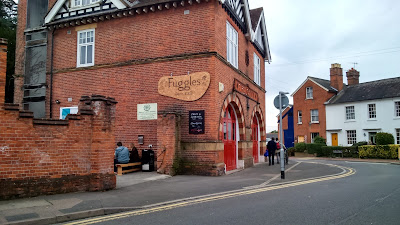 To elaborate; Tonbridge has a new venue in the guise of the town’s former fire station. Tucked away in the streets behind Tonbridge’s imposing 13th Century castle, the Old Fire Station saw the last fire engine depart back in 1986, when the Fire & Rescue Service moved to a modern and purpose-built facility on the town’s industrial estate. Now, after standing empty for the past three decades, and following extensive renovation work, the iconic building has been given a new lease of life, and opened its doors for the first time at the beginning of the month.

The Old Fire Station’s new owner is Richard Collins, a 42-year-old successful businessman who founded and runs Medischeme medical insurance brokers. Richard beat around 40 other bidders to buy the building after promising himself ten years ago that one day he'd own it. His idea is that the Old Fire Station will house a variety of pop-up bars, restaurants and shops, giving businesses which are new to the area the opportunity to trade in the town.

First to transform the disused space has been Tunbridge Wells based, Fuggles Beer Café; itself a recent and much welcomed addition to the local beer scene. Fuggles owner Alex Greig, hailed the move as a "great opportunity", stating “We've been quite keen on expanding the brand for a while now and this seemed like a great opportunity." He added “Tonbridge is very high on the list of places to move - whether that will be in a year or in five years. This is going to be something a bit different and I can't wait to bring a bit of Fuggles to the town."

This opportunity came true a week ago last Thursday. Unfortunately I was out of the country that week so was unable to attend. I did see via social media, that the initial three nights were a roaring success, so with the same nights (Thursday, Friday and Saturday) planned for this week, I took a wander down to see for myself.

I arrived shortly after 7.30pm on Friday evening, to find the place buzzing. Some people were standing out in the yard, but the majority were seated at wooden bench-like tables in the attractively renovated interior space. I had a pre-arranged meeting with a friend, who had arrived a little earlier than me. He recommended I try the Ilkley Fireside Porter, but I thought it a little early for such a dark beer. Instead I opted for a swift half of Arise, a 4.4% extremely well-hopped IPA from Burning Sky Brewery.

We bumped into three neighbours of mine, who were about to leave. They kindly offered us their table; right in the corner of the room, adjacent to the bar and close to the rather small kitchen. This was lucky, as the rest of the tables were all occupied. Looking around the clientele all seemed to be enjoying themselves. There were a good number of women, getting stuck into the beers, the wine and the gin and tonics; the latter being something of a speciality with Fuggles. The customers were certainly not the usual Wetherspoon’s crowd, nor were they the football shirt wearing, Fosters-swilling blokes who are all too common in Tonbridge pubs. Instead they appeared to be the sort of discerning people who would appreciate an establishment such as Fuggles, which offers a wide variety of beers along with interesting variations on other drinks.

It all bodes well for the future. I managed a very brief chat with owner Alex Greig who, like the rest of his staff, was rushed off his feet. He was extremely pleased with the way Fuggles have been received in the town, and confirmed that he is definitely looking for suitable premises in Tonbridge, to give the company a permanent home here.

After the craft-keg, I moved on to a pint of cask Mary Jane, a 3.5% pale ale from Ilkley Brewery. Brewed using American Amarillo and Cascade hops; this was an excellent and thirst-quenching beer. I followed with a pint of 4.2% Fireside Porter from the same brewery. Smooth, warming and eminently drinkable, this was a good beer to finish on. We left just before 10pm; my friend had a train to catch and I was tired following a hectic week at work, catching up with things after a week away in the Czech Republic.

I popped back in briefly, late this afternoon, having just enough time for a swift one before picking my son up from the station. The Old Fire Station was less busy, but there were still quite a few punters sitting enjoying what was on offer. Before leaving, I took the opportunity of shooting a few photos.

I will definitely be back; Fuggles themselves return next month and Sankeys, the Tunbridge Wells based, pub, fish restaurant and champagne bar people, will be running a pop-up over two weekends in December.

It is believed that more shops and restaurants will get involved to transform the ground floor of this iconic building, with owner Richard Collins, stating "Everyone loves it in Tonbridge. My offices are still going in on the top floor, but we are looking for a range of different things for downstairs. It's basically a big community space. Since we have started putting stuff online about the development, everyone has been coming to say what they would like to do.”

"The building was built in 1901, it's been community owned for a long time I am just the guardian of it. This isn't about making a profit, yes great if we do, but it's about people enjoying themselves. I want to do something for everyone; I don't want just restaurants and pubs. I want to get the whole community involved.”

For people like myself, not only does this development show that Tonbridge is finally starting to go places and become something which is a lot more than just a dormitory town for London-based workers. More to the point, it also demonstrates there is a demand for an innovative beer establishment, such as Fuggles (something many of us have known all along).
Posted by Paul Bailey at 23:10

Enterprise have a few (very few) managed houses and Punch have none. They're both pub property companies, not pub operators. Most (but not all) of the leases they've granted are tied on beer and cider but that's by the by - it doesn't mean they *run* those leased pubs (they have no involvement in them) and in any case (not that it would matter) it isn't even them doing the supplying subject to the tie (Punch sub contract that to Carlsberg, Enterprise use someone else, forget who). So there's no *chain*.

I understand what you are saying Jeff, but I think I am right in saying that both Enterprise and Punch have area managers, whose job it is to “look after” pub tenants, come up with ideas for maximising sales, suggest ways in which they can improve their businesses, and hence increase their profitability.

Nothing wrong with any of this, as it’s obviously in both party’s interest if the pub is doing well. The point I am trying to get across is that the pub operators (or certainly their representatives on the ground), are not terribly imaginative, and not very innovative.

The result being the “tried and tested”, but tired old formula I was referring to, of a few bog standard beers, quiz nights, karaoke (heavens forbid!), Sky Sports etc. I hate to use the expression, but none of them are “thinking outside the box”.

Paul, I can't really express it any differently so I'll just repeat myself: Punch and Enterprise are not pub chains.

The BDMs or relationship managers you mention have no involvement in running the pubs (they offer advice of course, usually self serving in that it's to buy the products the pubco takes the best margin from). Their job is to keep an eye on the property portfolio and spot problems - people going under, people buying out of tie.

Loads of Punch and Enterprise owned sites are run by their independent operators as restaurants so that rather debunks what you're saying about them playing it safe. In so far as there is any correlation between pubs playing it safe and being leased from the two big pubcos (and I don't think there is) there'd be a variety of reasons and not a simple causal link.

I do sort of know about this stuff from, well, first hand experience you know... ;-)

"I do sort of know about this stuff from, well, first hand experience you know... ;-"
Point taken, Jeff!