Time to Embrace the Can? 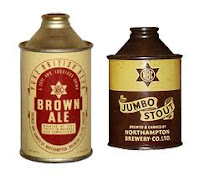 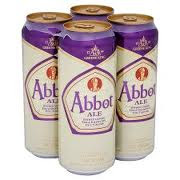 I must admit I’ve never been much of a fan of canned beer. For some reason I’ve always regarded the humble can as inferior compared to the glass bottle, but I’m not quite sure how this prejudice came about. It may date back to when I first started drinking, when 330ml cans were the only size available (apart from the dreaded Watney’s Party Sevens, of course, but that’s a different story!), but  that shouldn't have been a problem seeing as most bottled beers were packaged in smaller half pints (275ml). It may have been down to cans being cheaper, and hence “inferior” to bottles, or it may even date back to when it was necessary to use a can opener with a sharp-point to pierce the top of the can, making two holes, close to the rim, but opposite each other – one to let air in, the other to let the beer out.  Even so, one needed to use a bottle opener to prise off the crown cork, so there’s no real difference in the effort required to get at the contents.

The use of can-openers, of course, pre-dates the humble ring-pull. The first ring-pull can I was aware of, was that for Ind Coope Long Life, export pale ale. (I wasn’t old enough to drink at the time, but I remember being impressed watching the TV ads and seeing the cans being effortlessly opened!). 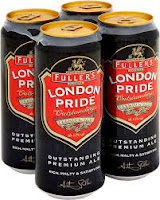 Compared to bottles though, cans are a comparatively recent form of packaging for beer. They were first introduced in the UK by Felinfoel Brewery of Llanelli, back in 1935, as a means of trying to boost the local tin-plate industry, which was flagging at the time. They had first made their appearance, a few years earlier in the United States, following the ending of Prohibition, but they didn’t really catch on this side of the Atlantic until the late 1950’s – early 1960’s. I have seen photos of these early cans, which were known as “cone-tops”, because they had cone-shaped tops, sealed with traditional crown-caps!

Until then, glass was very much the king, and the decades following the Second World War saw a dramatic increase in sales of bottled beers as consumers embraced the consistency which bottled beer offered, compared to the increasingly variable quality of much of the draught (cask) beer available at the time. Even as late as the early 1970’s, virtually all breweries produced a range of bottled beers, even most of the remaining small independent ones. A flick through the pages of Frank Baillie’s ground-breaking 1972 classic, “Beer Drinker’s Companion” will confirm this.  A decade or so later though, sales of bottled beer experienced a steep decline with the advent of “keg” beers, (effectively bottled beer in a bulk container), and with the increasing popularity, and rise in the consistency, of cask beer, following the success of the “Real Ale Revolution”, sparked by CAMRA.

Things swung back the other way again sometime in the late 80s or even early 90s, with the advent of single 500 ml ale bottles in supermarkets, aimed at the take-home market. Nowadays there is a vast range of bottled beers, both ales and lagers, adorning the shelves of supermarkets and specialist off-licences, but not so large a range of cans.

As mentioned, early cans were constructed out of tin-plate (steel, with a protective coating of tin), which means not only do they have a seam down the side, but they also require both the top and bottom to be welded on as well. During the late 1960s – early 1970’s ’aluminium cans began to make significant inroads into the canned beer market. Aluminium is considerably lighter than steel, and can also be “spun”. This means it is possible to manufacture the body of the can in one piece, leaving just the top to be welded on, normally after filling. The only problem was the inner part of the can, the part in contact with the beer, required a thin plastic coating to prevent the aluminium from giving the beer an unpleasant taint.  The coatings used today have virtually eliminated this problem, so really there are no reasons, apart from those based purely on snobbery, why the can should not take its rightful place as the “de rigueur” container for beer in the take-home market.

Cans, of course, are much lighter than bottles, and are less bulky as well, but they continue to be regarded as downmarket. The rise in popularity of canned beer in America during the 1950’s, gave rise to the “six-pack” and led to beer packaged in this way being regarded as a commodity, something to be picked up with the rest of the weekly grocery shopping down at the supermarket.  Where America leads, the rest of the world often follows, and a decade or so later slabs of “cooking lager”, sold at giveaway prices, became a familiar sight on the shelves of UK supermarkets. Low prices have not helped the can’s image, but I have a feeling the can is on the verge of a comeback and a reappraisal of its cheap and cheerful image.

In Japan, a country I visited recently, there were no downmarket connotations attached to the can, in fact in an increasingly environmentally aware country, the can is king, so far as the take home market is concerned. This fact was brought home to me whilst shopping in a Kyoto supermarket for items to bring home with me. There were lots of different canned beers on the shelves, but precious few bottles. I remarked on this to one of my Japanese colleagues who was with me at the time, as I was concerned as to whether cans would survive the lengthy flight home in my hold baggage. My colleague replied that he had never had any problems in this respect, so I grabbed a few that took my fancy. He was right of course, and my cans made it home in one piece, and what’s more the contents tasted every bit as good as their draught counterparts I had sampled during my stay in the country. I also got to try a locally-brewed Japanese craft-beer in a Kyoto bar, and that came in a can. Yona Yona Ale proved to be an excellent pale ale, being one of a number of different beers brewed by Yoho Brewing based in the small town of Karuizawa.

Leaving aside “cooking lager”, which is purposely sold as a cheap commodity, most of the leading ale brands, such as Fullers London Pride, Greene King Abbot, Wells Bombardier, Badger Tanglefoot etc., are available in cans, here in the UK. One or two of the new wave of “craft-beer” brewers, such as Brew Dog, have packaged some of their higher volume brands in cans as well. It remains to be seen whether others will follow.

There is one additional advantage that cans have over bottles, and that is by their inherent nature they are completely light-proof. As we know, all bottles allow a certain amount of light to pass through them.  This applies to both brown and green bottles, because if they didn’t they would be completely opaque and it would not be possible to view the contents inside. Brown and, to a lesser extent, green bottles filter out the harmful waves of UV light, responsible for imparting that “light-struck”, or “skunked” effect. This can cause unpleasant off-tastes and degradation of the finished beer. Bottles manufactured from clear glass, of course, offer no such protection, but marketing departments, keen to show their company’s beer, and its colour, in the best possible light, often ignore this fact and insist on the beer being packaged in clear glass. There is no possibility of marketing departments doing this with cans; it just cannot happen! The result is a much more stable product.
Is it therefore now time to re-appraise the humble can, drop the misplaced snobbery against this form of packaging, and embrace it for the advantages outline above?
Posted by Paul Bailey at 22:35

I would say if cans are really going to make inroads into the premium bottled ale and craft beer sectors, retailers need to grasp the nettle of selling individual cans rather than just four-packs, as drinkers want to experiment with a variety of different beers. Currently there is a prejudice against selling single cans as it is seen as an encouragement to problem drinkers who are strapped for cash.

Gosh, Curmudgeon, they were only 275ml, and not much variety either! It was only the larger breweries who had the resources, and the market, to can their beers, which meant Courage and Whitbread where I lived, and then only light, pale and brown ale was available.

The first time I saw larger (440ml) cans was for Mc'Ewans Export and Younger's Tartan. How times have changed?

I seem to recall M&S trying to sell quality beers in cans a good few years ago, but they didn't catch on.

Camden Town brewery have installed a micro-canning line and can some of their beer now. America has had micro-canning for a few years now.

I wrote a post about cans back in September last year, and I notice you commented on it, Mudgie. http://baileysbeerblog.blogspot.co.uk/2013/09/time-to-embrace-can.html.

I was prompted to write it following my visit to Japan earlier in the year; a country where cans are very common in the take-home trade, primarily for their supposed “green” credentials.

A comparison between the various advantages, and disadvantages of both cans and bottles, was one of the topics at the recent European Beer Bloggers Conference in Dublin, and whilst no definite conclusions were reached, cans do appear very popular in the American take-home market.

It seems some European brewers are pushing them too, as we were given some very nice looking cans of Pilsner Urquell to take away with us and try. I’ll be posting about this at a later date, but I do feel I was able to tell the difference, taste-wise, between the bottled and canned versions of this Czech classic.

In the meantime Mudgie, I would agree whole-heartedly with your comment that “If cans are really going to make inroads into the premium bottled ale and craft beer sectors, retailers need to grasp the nettle of selling individual cans rather than just four-packs, as drinkers want to experiment with a variety of different beers.”

Somehow I can’t see it happening though!