1001 Beers You Must Try Before You Die 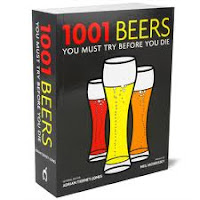 I received this weighty tome as a Christmas gift back in 2010, (the year it was published). Although I flicked through the pages at the time, I didn't really pay that much attention to it, as at 960 pages it take a bit of wading through. However, it is good to dip into, from time to time, if only to see what the various contributors view as  their "Must try beers", and to see whether you agree with their selection or not. The colour photographs used to illustrate the book deserve special mention. The editor states that "the photographers took great care to photograph the beers at the temperature  suggested by the brewers, and where possible, they photographed each beer in the appropriate branded glass."

A book this size though is rather unwieldy, and I have to say it's not very easy to navigate around either, but it goes with others in the "1001 XYZ You Must Try Before You Die " series such as 1001 Wines and 1001 Foods, alongside the almost obligatory "1001 Places You Must See Before You Die". The publishers who thought up this concept must be laughing all the way to the bank!

Returning to finding one's way around the book for a minute; 1001 Beers lists its selection primarily by colour (see below*), rather than country or brewery, but this does involve a lot of page hopping. There is a handy "Index of Beers by Country", at the front of the publication, which affords a quick ready reference, but only if you already know the beers you are looking for. However, in an idle moment of curiosity, and given the appalling weather we've been having there's been plenty of those this Christmas break, I decided to be really geeky and nerdy and count up just how many of the 1001 beers I have actually tried.

The total came out at 150 beers, or just under 15%, although I'm pretty certain there are quite a few others I may have sampled in the past, but can't remember for definite. This particularly applies to the Belgian beers, where I seem to have mislaid the notes I have kept over many years sampling the beers of that country, both in the UK and in Belgium itself.  I also discovered that, when looked at on a country-by-country basis, there are nation's who's beers I have sampled at a much higher rate than others.

It is therefore not surprising that England comes out on top, with 75 out of 110 but, on the other hand, despite regular visits to Germany, admittedly mainly to Bavaria, I only manage 19 out of 96  beers listed. At the other end of the spectrum my tally for the United States is a mere 7 out of 242, and this is my main gripe with the book, although I'm sure other beer writers would disagree: it is too heavily biased towards the USA (or are there just so many fine beers out there that I haven't yet had the chance to sample?)

So why does this matter I hear people ask? The simple answer is, of course, it doesn't mater one jot. I am not a ticker, determined to cross off as many beers as possible, but someone who likes to drink interesting and characterful beers. I do normally make a note, particularly if I find them to my liking, in order that I can look out for them again in the future. Equally, if they are not to my taste, then I will also make a record, normally a mental one, so I can avoid them in the future.

Concepts such as "1001 XYZ You Must Try Before You Die " are inevitably flawed, and I don't like the use of the word "must" in such cases. As someone in his late 50's  I resent people trying to tell me what to do, and question the use of "must" in these circumstances. Why "must" I try these beers? Who the hell says that I "must" try them?  The answer, in this case, comes from the book's 42 contributors. They include well-known beer writers such as Pete Brown, Des de Moor, Jeff Evans, Evan Rail and Sally Toms; Beer Shop owner and blogger Zak Avery. Fellow bloggers and beer lovers Melisa Cole and Jeff Pickthall, beer historian and avid blogger-cum-writer Ron Pattinson, plus a number of international contributors. The whole project was overseen by Adrian Tierny-Jones who, as well as reviewing some of the beers, acted as General Editor, co-ordinating the project and putting everything together.

I am not suggesting you rush out and buy the book, even though Amazon have it listed at just £10 (half its cover price!). However, I would be interested to hear what others think of it and, more importantly from a beer geek point of view, how many of the 1001 beers they have tried.

I kind of think the value of such books appears when they reach about ten years old; when you start getting a perspective on what people thought was a good beer back then, half the beers are no longer available and the other half have new labels, so it’s fun to see the old ones.

Yes, what Barm said, although we also found Michael Jackson's list of 500 really useful when we were just starting out. The first time we disagreed with him, we knew we'd come of age...

Bar, Bailey you are both right about these sort of publications. Whilst I haven#t seen Michael Jackson'd list I do have a copy of "300 Beers to Try Before You Die" by Roger Protz.

Published in 2005 it's a lot less ambitious in its scope and probably far more sensible, as well, than 1001 Beers. Some of the selections do now look a little dated, and I'm sure there are some that are no longer available (although I haven't checked this for certain).

As we all know, brewers update their brands from time to time, and not just so far as the packaging is concerned! As certain beers increase in popularity, they atart to become more mainstream. This runs the risk of their becoming blander as brewers (ok not brewers, but accountants) start cutting costs, maturation times etc.

Final point; I haven't counted (yet) how many I have tried out of the 300 beers Roger recommends, but I might do soon, just to satisfy my own curiosity.

I'm a bit late to reply but I've recently acquired this book, and have an ambition to try as many as possible, I've counted up how many I've had so far and it comes in at only 52, however there are some that I know the names, but can't recall specifically having tried them, so this number could be higher. 2 each weekend, should see me taking 9 ish years to sample most of these.

I was looking for a spreadsheet or electronic version that's easier to carry round, as I'm not sure I want to spend time typing in details of 1001 beers.

and yes it's now 6 years old so even more are no longer available, or questionable as to why they're there.