The Pubs of Tonbridge Part 4

I've been putting off publishing this post primarily because my researches are still a bit patchy. The northern part of Tonbridge is unfamiliar territory, and I don't venture up there that often, especially not to have a drink. It's a good half-hour's walk from where I live and, without wishing to be unkind, I don't think I'm missing that much. If anyone thinks differently, then please let me know. Anyway, without further ado, this article concludes my look at the pubs of  Tonbridge. 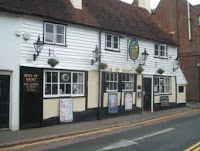 Following on from where we left off last time, we continue northwards, up the High Street,  to the Slug and Lettuce. Not really a pub in my book, but more of a wine bar trying to be a pub. Slug and Lettuce are a national chain, operating some 70 "themed" outlets throughout the UK. Looking on their website they seem to major on food, wine plus cocktails. Beer doesn't seem to feature at all, although I know from a friend that the Tonbridge outlet does sell  John Smiths Extra Smooth - so smooth it's tasteless, and not really beer so far as I am concerned. I quite enjoy wine, but primarily with a meal and am not prepared to pay wine bar prices, or go with the bulk purchased, mass-produced stuff  that is the norm in such establishments. For these reasons I  have never drunk in there, but more so because they don't sell any cask beer.

When the Slug first opened though, they had some brewing kit - nicely polished copper vessels, which intrigued me at the time. It turned out this was just for show and the Slug never brewed a drop of beer of its own. Sometimes known, perhaps unfairly, as the Drug & Lettuce, the Slag and Lettuce or even the Shag and Lettuce, this establishment occupies part of what used to be the Electricity Showrooms. It seems popular enough and obviously fulfils a need; it just isn't the sort of place that appeals to a grumpy middle-aged bloke like me!

Back to the High Street and across the road is the Chequers; one of the oldest, if not THE oldest building in Tonbridge (apart from the castle), dating back to the late 15th Century. The Chequers is a traditional town-centre pub that fortunately doesn't seem to have altered much over the years. Inside it's all low beams and dark-stained wood, and since the removal of the glass-fronted food cabinet, which used to be  the first sight that greeted customers upon entering the pub, the Chequers, in my opinion, has actually improved. It's also one of the few pubs in Tonbridge that still sells Fullers London Pride, a beer that was fairly common-place in the locality a few years ago.  I don't know whether the pub still hosts live music nights, (it certainly used to on a Sunday, back when I had my off-licence), but it does feature karaoke evenings, for those of a masochistic nature!


Crossing the High Street, just outside the Chequers and heading a short distance along East Street, brings one to the Man of Kent, another interesting old pub,  not quite as old as the Chequers, but still full of character. When I first arrived to work in Tonbridge, the Man of Kent of Kent was owned by Charringtons, and served a very acceptable pint of  Draught Bass. These days I'm not certain who owns it, but Harvey's Best plus Tonbridge Copper Knob are the beers on offer. From the outside, the pub is an attractive white-painted, weather-board clad building, which in common with the Chequers, has plenty of old, exposed beams in evidence. There is a comfortable seating area to the right of the entrance, grouped around the log-burning stove. When I first frequented it, the Man of Kent had two bars, but these were knocked through into one quite some time ago. The drinking area has also been extended by opening up the area behind the bar, which also leads out into a small garden-cum-outdoor drinking area. Still very much a proper town local, it is well worth paying the pub a visit.-

Re-tracing one's steps along East Street and back to the High Street, and then continuing away from the town centre, soon brings one to the Rose & Crown. This imposing brick-fronted building, complete with its porched entranced topped with the Royal Coat of Arms, is Tonbridge's premier hotel, and has certainly seen many comings and goings, and witnessed many historic events over the years. The Rose & Crown is a former coaching inn that can trace its origins back to Tudor times. Today it has 56 comfortable bedrooms and offers guests all the facilities one would expect from a town-centre hotel.  These include a comfortable bar which is open to non-residents, and which used to be a nice place to just sit and watch the world go by. It is quite some time since I last did this though, and the bar appears to have now been moved to the other side of the main entrance. Like the Man of Kent, the Rose & Crown used to serve a good pint of  Draught Bass, but that particular beer has long since vanished and, I believe, the bar now stocks beers from Greene King.

Leaving the Rose and Crown, turn right and continue along the High Street where, at the junction with Bordyke, one comes to the Ivy House, an attractive old building, not quite as ancient as the Chequers, but still dating aback to the 16th Century, and a Grade II listed building. The Ivy House was the third pub owned by Colm Powell, who we encountered earlier. When I first knew the pub it was virtually a two bar establishment, popular with bikers and those of a slightly "bohemian" disposition. When I last worked in Tonbridge (1996-2001), the Ivy House had a good reputation for food, and the company I worked took full advantage of this, and used the pub as somewhere to wine and dine visiting customers.

In the summer of 2009 it closed for extensive refurbishment and re-opened as The Ivy, styling itself more as a restaurant than a pub.  At the helm was a "celebrity chef" (whatever that means?), in the person of John Burton-Race, although I can't say I've ever heard of him! This wasn't the wisest of moves at the height of a recession, and Tonbridge certainly didn't appear ready for such an upmarket hostelry, or upmarket prices, and the Ivy was forced to make some changes. I still get the impression when I go in there, which I have to admit isn't that often, that The Ivy is still a restaurant with a bar attached but, on the plus side, it was still serving Harvey's at the time of my last visit, and the staff were very pleasant.

Leaving the Ivy House there are just two pubs to go now, as one continues in a northerly direction away from the town centre. It's probably about 5 minutes walk to the George & Dragon, the first of these two pubs. situated just past  where the road splits into London Road and Shipbourne Road. We need to take the latter, which is the right hand fork.

Back in the early 80's, when I first worked in Tonbridge, I used the George & Dragon quite a bit. It was a popular watering hole with employees of the company I was employed by, back in the day when going for a lunchtime pint was viewed as quite a normal activity, rather than some thing to be frowned upon or even out and out discouraged. When I moved on to other employment I stopped going there, and whilst I still called in from time to time, these visits became less and less frequent. My visit back in May last year was probably my first in over ten years, but I have to say I was very pleasantly surprised by what I found. Alongside pub favourites such as Harvey's and Wells Bombardier,  Rustic, a beer from the local Tonbridge Brewery, was on sale. Prices were very reasonable as well, so definitely somewhere worthy of a return visit, and a good place to call in at when in the northern part of the town.

Unfortunately there is now just one other pub past the George and Dragon, as all the other pubs in the north of the town have closed. Some have been demolished for housing, whilst others have been converted to other uses. All this leave the Royal Oak as the sole surviving pub in this heavily populated part of the town. Situated virtually next to the Shell garage, the Royal Oak is very much a locals' pub. I can't really say much more about it as it must be getting on for 20 years or so since I last visited the place, although I am reliably informed it keeps a good pint of Harvey's.

This effectively concludes this article and indeed my series on the pubs of Tonbridge. A decade or so ago residents of north Tonbridge had the choice of four other pubs in which to enjoy a drink As alluded to above. three of these have subsequently been demolished, (Greyhound, Pinnacles and Red House) and the sites  used for housing, whilst the other one (Bishop's Oak) is now a Sainsbury's Local! A sorry state of affairs for anyone who likes a pint, especially in this area of the town!
Posted by Paul Bailey at 22:04