Well I've purchased my advanced tickets for Friday, printed them off, and have just about finished sorting out my beer list using the interactive feature on the GBBF website. Having missed last year's event, I am really  looking forward to this year's, especially as the festival is returning to Olympia. I much prefer this venue to Earl's Court, which always seemed like an underground car park to me; gloomy, all concrete pillars and roof, with no natural lighting! My son is accompanying me for the first time, and although he's a lager drinker, I am sure there will be plenty of beers that will interest him at GBBF. 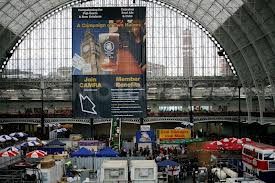 Whilst on the subject of beers, I have to say there seem to be a number of glaring omissions with regard to those breweries chosen for the festival. Whilst one might not have expected  Brew Dog to feature, given their somewhat rocky relationship with CAMRA, I am surprised, and somewhat disappointed that the likes of Camden Town, Dark Star, Hawkshead, Kernel, Meantime etc are not featured. I am also disappointed that only four Kentish breweries have been selected (and one of those is Shepherd Neame!). The Garden of England now boasts twenty-five breweries for heaven's sake, so come on organisers, what are you playing at? Also, there appears to be no Czech beers amongst the foreign beers selected. Surely one of the world's greatest brewing nations deserves better than this?

Despite these gripes, I'm managing to wade my way through the assortment of boring brown beers with silly names, and come up with a selection that I look forward to trying on the day. I am also looking forward to visiting the various stands. especially the CAMRA bookshop and food stalls, scattered throughout the hall, and hopefully meeting up with friends both old and new.

One final gripe: as mentioned above,  I bought my tickets in advance, using the on-line booking facility on the website. This offers a £2 reduction off the "on the door" price. However, CAMRA then spoil things by charging a transaction fee of £1.06, so this is not quite the bargain offer it first appears.Admittedly this fee is charged per order and NOT per ticket, but it is still over the top, especially when one is using one's own paper and ink to print the tickets out! One might expect this  from Ryan Air, but surely not from the Campaign for Real Ale?

Moan over. I know a huge amount of work goes into organising, running and staffing the Great British Beer Festival; the vast majority of it carried out by an army of unsung volunteers who give up their spare time, and in many cases part of their annual leave, to ensure the festival is a resounding success. I take my hat off to them all, and look forward to enjoying the fruits of all their hard work when I visit Olympia on Friday.

Footnote: I see that  Coniston No 9 Barley Wine, has won the Champion Beer of Britain, Congratulations to the brewery,  but whilst it's good to see this style of beer wining the top award, I can see them running into all sorts of problems in trying to meet the inevitable demand there will now be for this ale. Winning the CBOB award can sometimes be a poisoned chalice, as several previous winners have found to their cost!
Posted by Paul Bailey at 22:13

I think the issue on the Czech beer thing is room. You'll find we are half the size we used to be at Earl's Court and we have a ready source for German beers.

Look forward to a chat on Friday.

I gathered space might be an issue; hence the move in recent years to Earl's Court.

Look forward to meeting up with you on Friday (tomorrow).