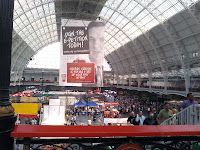 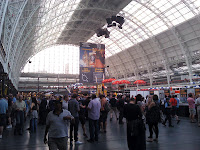 I attended the Great British Beer Festival, as planned last Friday and was pleasantly surprised by what I found. Fears, aired by some correspondents, over travel difficulties proved groundless from the point of view of my party, with three of us (son Matthew,  friend Don plus myself)  travelling  up from Tonbridge by train, to Waterloo and then catching a train to Clapham Junction. From here we caught a London Overground service involving just three stops, to Olympia. This was a far better option than battling along on the District Line and then having to wait ages on the platform at Earl’s Court for a shuttle, which wasn’t running anyway.

Once inside the venue, we picked up a programme, plus a glass each and then grabbed a quick beer (Worthington E in my case), before heading up onto the new mezzanine floor at the rear of the hall. This proved a good move as we were able to commandeer a table at which we based ourselves for the rest of the day, taking it in turns to issue forth on forays to the various bars or food stands for essential supplies. Our base was more or less adjacent to the Czech and German bar, which pleased Matthew as he is a lager drinker rather than a real ale fan. There were several beers on sale here that he was already familiar with from our past trips to Germany, including Andechs, Augustiner, Kneitinger and Tegernsee. It was also on a trip back from this bar that I bumped into Peter Alexander aka Tandleman, who was waiting to start his stint behind the aforementioned bar. Having been a regular follow of Tandleman’s entertaining and highly readable blog for several years, it was really good to meet up with him in person, and put a face to the name, so to speak. We had a chat about how the festival was going, his recent trip to Berlin and things in general, and after going our separate ways bumped into each other again a bit.later on.

I didn’t say so at the beginning of the post, but walking into Olympia that day was just like old times. The bright and airy feel that the impressive glass-canopied roof gives to the venue was in stark contrast to the gloomy, oppressive feel of Earl’s Court, where there is no natural lighting, and apart from space constraints one can’t help wondering why CAMRA ever moved from here in the first place.

Well, that’s the transport arrangements and the venue dealt with, so what about the most important part of the festival, namely the beer? In the days preceding the event I had made full use of the interactive “list-creating” feature on the GBBF website. Over this time I’d built up a list of some 30 possible beers to try, most of which were well-hopped, pale or golden beers. With one or two exceptions, I had selected beers that were brewed using a proportion of American or New Zealand hops, as I like the crisp, citrus-like aromas imparted by these varieties. I was slightly disappointed that some of the more cutting edge breweries were not represented at the festival, but with a list of nearly 30 beers to choose from I was sure I would find plenty to my liking, which I of course did. I was tempted to include some actual American-brewed beers in my list, but as I would be drinking all day, the high alcoholic strength of most of them  put me off. There was also the thought that it would be rather churlish to be drinking American beers at the Great British Beer Festival!

Looking back I tried just over half the beers on my list. Unfortunately being the penultimate day of the festival quite a few of the more esoteric beers had sold out, and thus I was denied the delights of Black Cherry Mild from Kissingate Brewery, Chocolate Orange Delight from Downton and Chocolate Orange Stout from Amber Ales. What I did manage to catch though was 5X from Greene King. This 12% ABV aged beer is normally only used for blending with another beer to make Suffolk Strong (6% ABV). It undergoes a long maturation in oak vats at the brewery, like a keeping or stock ale of old. As far as I’m aware this is the first occasion that Greene King have allowed it to be served, unblended to the general public. There was a catch though,  because of  the beer's rarity value there was only one firkin per day on sale from 5pm onwards, until it ran out, (which wasn’t long!). In addition, it was only available in third of a pint measures, with each one costing £2.00. (Highly reasonable in view of its high strength and the limited quantity available.)

After queueing up and procuring my sample I set about tasting this legendary beer. It was mid-brown in colour, virtually devoid of condition, but with a complex and varied palate that resembled a fortified wine such as Madeira or Amontillado sherry. It really was like travelling back to the 18th Century when such strong, vatted keeping ales were much more commonplace, and when large country houses would have had their own brew-house turning out such beers for the landed gentry to enjoy. Whether Greene King could produce enough of this beer on a regular basis, bearing in mind the long maturation period it undergoes is open to question, as is whether there would be sufficient demand for such a strong and unusual beer.

As well as the aforementioned, golden, hoppy American style pale ales, there were a couple of other beers that really caught my fancy. First Old Dairy Silver Top, a very drinkable recreation of the now rare Cream Stout style of beer, with toffee, chocolate and coffee flavours from the roasted malts used,  and Worthington White Shield, a beer that needs no introduction in bottled form, but which on draught tasted even better.  Molson Coors, please take note and make this excellent beer more widely available on draught! I had one foreign beer, Schumacher Alt – a copper-coloured alt-style beer from Dusseldorf, with a strong malty flavour.  I wanted to end with another foreign beer; an old favourite and one of the most unusual and highly flavoured beers available. Unfortunately draught stocks of  the legendary Schlenkerla Rauchbier from Bamberg had been exhausted for the day, and whilst it was still available in bottled form, a half litre at this late stage of the proceedings would not have been advisable.

Having dealt with the beer, mention should be made of the food. We had bought a packed lunch with us, but as late afternoon turned into early evening we became peckish again. There had been snacks such as pork scratchings and pies to help soak up the beer, but by about 6pm both Matt and I were hungry enough to be attracted to the Thai food stall.  I had a very good Thai green curry, whilst Matt had Thai noodles. There were also plenty of other food stands to chose from, ranging from fish and chops to Cornish Pasties and Bratwurst.

We  eventually left the festival shortly before 9pm. It had become increasingly more crowded by this time with the arrival of  the after work crowd, and people were three or four deep at the bar waiting to get served. When one has to fight one's way to the bar, then it ceases to be a pleasant experience. All power to CAMRA's elbow though, as once again the festival was obviously a rip-roaring success. It's early days yet, but with talk of Earl's Court being demolished, plus the West Hall being available next year at Olympia, then the latter seems the logical venue at which to hold GBBF. I for one certainly hope so.
Posted by Paul Bailey at 21:46

5X was available to the East Anglian Beer Festival earlier in the year; it was phenominal. http://beer.bobarnott.com/2012/04/27/great-expectations-at-the-east-anglian-beer-festival/

Binary Options is the way to [url=http://www.brokersring.com/]make money[/url] securely online