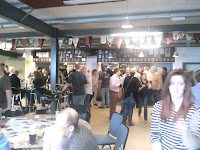 Last Thursday morning reports began to trickle in that, owing to flooding, the SIBA South East Beer Festival had had to be cancelled. Now we are all aware that so far this summer has been a washout, but surely for an event of this magnitude not to go ahead must have been due to something pretty serious? I later found out that all was going to plan the day before, with the beer all delivered on time, the casks all stillaged ready for tapping and spiling and the cooling system in place, leaving the organisers well pleased with their efforts. Unfortunately the vagaries of the English climate put paid to that and torrential rain overnight rain on Wednesday evening into Thursday had left parts of Tonbridge Sportsground knee deep in floodwater. The situation had not been helped by the Environment Agency opening the sluices of the Flood Barrier upstream at Leigh; a decision that sent a surge of water rushing down the Medway and right across the already saturated playing fields.

Come Thursday morning, the marquee where the beers were housed and neatly racked, was only accessible to those wearing waders, and faced with the threat of further rain, the organisers had no choice but to call off the event. Later that same day came reports that Tonbridge Juddians Rugby Club were determined to salvage something from the event and were planning to hold a mini-festival in their clubhouse, featuring a much smaller selection of the 150 or so beers originally scheduled. The clubhouse is an impressive, bright and airy building raised above the surrounding playing fields as a precaution against  flooding so, unlike the adjacent marquee, at least this venue would be safe and dry!

This still meant that there would be no competition, so far as SIBA were concerned, and for those planning to attend the min-festival, a much reduced range of beers on offer. With these SIBA organised events, all the breweries concerned supply the beer foc. After all it is in their own interest, especially if one of their beers wins an award in the various classes. As the beers in this case had not been tapped and spiled, it was no problem for them to be returned to their respective breweries, once the flood waters had subsided. This way any losses would be kept to a minimum, and with TJ's Rugby Club going ahead with the small scale event, some of their costs too could also be re-couped.

I turned up, along with my friend Eric, on Saturday at TJ's clubhouse just after 1pm. The doors had only been open for an hour, but the place was already quite busy. There were four beers available on hand pump, with a further four available from the cellar room out the back. The range was scheduled to alter as the festival progressed, but there were some good choices amongst the eight that were on sale initially. I plumped for Spirit of Kent, from local brewers Westerham, and this new, 4% pale beer was a good one to begin with. Shortly after I bumped into Clive, who is our branch treasurer, and not long afterwards chairman Iain and secretary Carole also turned up. Clive had bagged a table, so we made ourselves comfortable, and got chatting to a couple who were already sitting there. It turned out they had travelled down from Stockport specially for the festival and were unaware until their arrival that the main event had been cancelled. They still seemed to be enjoying themselves, even though many of the beers they had wanted to "tick" were unavailable. Several colleagues from work also came along; their village cricket match having been cancelled due to the inclement weather.

I'm not quite certain at what time I left, but the place had filled up nicely long before. Amongst the other beers I enjoyed were Sambrooks Powerhouse Porter, Tonbridge Coppernob, Royal Tunbridge Wells Beau Porter and, beer of the festival so far as I was concerned, Dark Star Revelation. This exceedingly well-hopped 5.7% pale ale was everything one would expect from this well-respected West Sussex brewery, with the strong flavour of the American hops used really coming through.

I'm not certain how many beers were left on Sunday, but judging by the way things were going when I left early Saturday evening I reckon most, if not all of them would have sold out. I have to say full marks to all involved at Tonbridge Juddians for managing to pull something out of the bag at the last minute, and for pulling off a such a successful event out of adversity.

Footnote: For non-local readers, until very recently, Tonbridge had a history of flooding. The town is sited where the River Medway divides into a number of smaller streams and this, coupled with the low-lying surroundings, makes it vulnerable to flooding. The most devastating floods occurred in 1968, after which substantial  defences, in the form of a sluice-operated flood barrier, were constructed upstream at Leigh. The defences were severely tested in 2000, when heavy rains left much of the Sportsground, plus a few town centre car-parks, under several feet of water. Fortunately the flood barrier proved its worth, and the town was spared the deluge it received 30 years previously.

It is not that unusual for the Sportsground to be under water in winter, but in the middle of July is unprecedented!