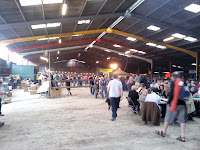 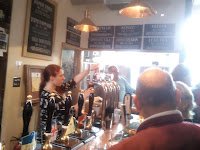 As mentioned in my previous post, I attended the Kent Beer Festival last Friday as planned, and am pleased to report it was a most enjoyable event. Before I go any further though I have to correct an error in that post, where I described this year's event as the 35th such festival. In actual fact it was the 38th, which is quite a record. Kent is officially the second oldest CAMRA beer festival in the country; the oldest is Cambridge by just one year! According to the programme, Kent's first beer festival  was held in a marquee in Canterbury's Dane John Gardens, back in 1975. It lasted for one day and sold out of beer early. Nowadays it takes place over a three day period, and is held in a huge cow shed at Merton Farm, on the outskirts of the city. 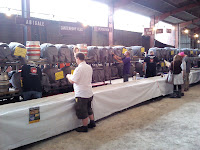 A free shuttle bus operates between the farm and Canterbury Bus Station, ferrying thirsty punters to the festival, and then taking them safely back into the city at the close of each session, and it was the first of the day's shuttle buses that my four friends and I boarded last Friday. We has travelled up by train from Tonbridge, and after a short walk through Canterbury's ancient streets. were eager to get to the festival and get down to some serious sampling.

After the bus had deposited us at the farm we joined the queue for glasses, tokens plus a Festival Programme listing the beers on offer. The programme reminded us that at the time of the first event in 1975, there were only two surviving breweries in Kent: Shepherd Neame and Whitbread Fremlins. Today, the county is home to over twenty-five breweries, all of which were represented at the festival, with the exception of Moodleys, which brews exclusively bottled beers. All the Kent breweries were grouped together, which made my decision to restrict my sampling solely to Kentish ales, all the more easier.

I didn't try them all of course, but instead used the festival as a chance to try those new breweries who's products I hadn't sampled before, plus a few others who were showcasing new beers. Those breweries I did try were Abigail, Black Cat, Goody Ales, Hop Fuzz, Kent Brewery, Old Dairy, Ripple Steam Brewery, Rockin' Robin, Royal TunbridgeWells and Wantsum. Beer of the festival, so far as I was concerned, but also in the opinion of the majority of the West Kent CAMRA contingent, was Black Cat Hopsmack, described in the programme as a "Golden citrus-style beer with Amarillo and Cascade hops."  That was a wholly accurate description of this excellent beer, brewed by a new brewery, based at Groombridge in our branch area. Well done to owner and brewer Marcus Howes for coming up with this real winner. Other beers that impressed included Good Heavens from Goody Ales of Herne, Black Gold (a black IPA) from Kent Brewery of Birling and 1381 from Wantsum of Hersden.

As well as Kentish beers, the festival featured ciders and perries from exclusively Kentish producers. There were, of course beers brewed by breweries from outside the county, and these included offering from such old favourites as Acorn, Batemans, Cotleigh, Dark Star, Fullers, Fyne, Marble, Surrey Hills and Triple fff to name but a few. There was also a selection of foreign beers; mainly bottled, but including a couple of draught Belgian ales that were dispensed by hand pump. To mop up the beer there was a good selection of food available, including a stall selling curry, but it was especially good to see old favourites, Melbourne Catering Co there once again, with their selection of German sausages (Bratwurst, Grillwurst and Bockwurst), plus French crepes.

The session we attended was timed between 12 noon and 4pm, but about an hour before closing time the heavens opened.and torrential rain poured down onto the festival site. Although there were one or two leaks in the roof, in the main we remained dry inside, although when it came to queueing up for the bus to take us back into Canterbury we did get a trifle wet. Fortunately I'd had the sense to wear my walking boots, and my feet at least remained dry.

Arriving back in the city we headed for Canterbury's new brew-pub, the Foundry, just off the High Street in White Horse Lane. This pleasant, open-plan pub had some four ales on hand pump, plus a number of craft-keg beers. These included a Helles, a Red Rye Beer and a Belgian-style ale. I stuck to the cask-conditioned offerings and enjoyed Foundryman's Gold and Foundry Torpedo; the latter being an extremely well-hopped amber coloured ale.

After a few beers here we all decided that we'd had enough and, seeing as we were travelling on a joint ticket, made our way back to Canterbury West station. Unfortunately there wasn't sufficient time to call in at the excellent Bottle Shop, housed in a former goods shed next to the station, but there's always another time. My visit to the Kent Festival had been a long overdue one, but from now on I'll definitely be including it in my itinerary of "must do" events.
Posted by Paul Bailey at 22:39