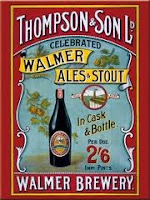 Well it's official, as I've just received confirmation via CAMRA's Regional Brewery Report, that the number of breweries operating in Kent has  reached 25. Not bad for a county the size of ours, and whilst I have reservations as to whether all these companies can survive, it is still an achievement to be proud of.

The breweries range in size from brew-pubs (we have two in the county; one in the east and one in the west), through to Kent's largest, and the country's oldest, brewery - Shepherd Neame of Faversham. In between are the likes of some of the longer established concerns such as Gadds, Goachers, Hodaemon, Larkins, Millis, Nelson, Westerham and Whitstable,  plus more recent arrivals such as Black Cat, Kent Brewery, Moodleys, Old Dairy, Royal Tunbridge Wells and Tonbridge Brewery.

Now with the establishment of brand new breweries in Ashford, Canterbury, Dover, Hythe and Maidstone the magic figure of 25 has been reached. As I said at the beginning, I just hope there is sufficient trade in the county for them all to survive as, in common with other parts of the country, we have had casualties in the past; Ales of Kent, Kent Garden Brewery and Swale Brewery spring to mind.

In the meantime though, I haven't managed to sample the wares of all of Kent's breweries yet; in fact I still have a fair way to go with the products of 10 enterprises yet to try! For a list of all the county's breweries please click on the following link. Kent Breweries. 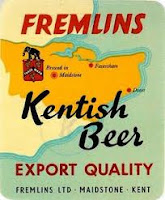 If you can get to Canterbury Food and Drink festival at the end of September you should find beers from 21 of the breweries in Kent: http://kentgreenhopbeer.com/

Thanks Ed. Have checked out the link and will try and get along, especially as there will be around 20 Kentish Green Hop Beers available.

Wow, 25 breweries? I had no idea there were that many - there should be a Kent beer festival!