Watering Holes on the Wealdway 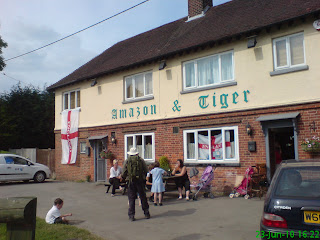 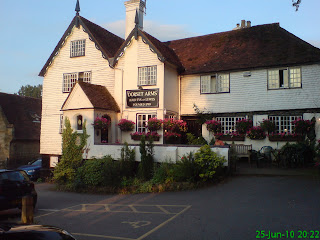 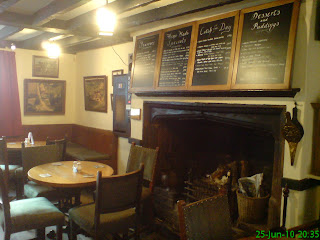 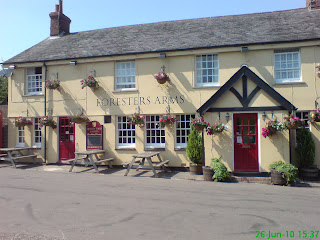 I returned late on Saturday evening from four days walking along part of the Wealdway long-distance footpath. The path runs for 82 miles from Gravesend on the River Thames to Eastbourne on the south coast. After successfully completing the South Downs Way last year, my friend Eric and I decided to give the Wealdway a try this year, and after completing 50 miles of the trail have been very impressed by what we have found so far.

As the footpath runs roughly north to south it traverses several ranges of hills with subsequent changes of scenery. On our journey south we crossed the line of the North Downs, descended into the Vale of Holmesdale, climbed and descended the Greensand Ridge, hiked along the Medway Valley, before climbing once more, this time onto the High Weald, culminating with a walk across Ashdown Forest.

The Wealdway passes right through our home town of Tonbridge, and many of the places we visited are quite local to us. As is often the case though, there is a tendency to ignore what is virtually right on one's doorstep in favour of places further afield. The walk therefore afforded the opportunity to renew acquaintances with some familiar places as well as allowing us to discover a few new ones. The re-discovery of old favourites was no more evident than in the case of the pubs we visited en route.

Our first watering hole was the unspoilt Amazon and Tiger, in the small village of Harvel, high on the North Downs. We had started out from Gravesend earlier that day, and like all four days on this trek the weather had not only been fine and dry, but also extremely hot and humid. These conditions forced a relatively slow pace, and it was getting on for 2.30 in the afternoon that we finally turned the corner in to Harvel and found, to our relief, that the pub was still open. We needn't have worried as the pub was open all day, that Wednesday being the day of England's World Cup group match against Slovenia.

The pub was busy, but we managed to order ourselves a pint without any trouble. I selected the 4.3% Barnsley Gold from Acorn Brewery; the other choices being a 5% beer from Brew Dog, and a "badged beer" from Cottage Brewery. Eric went with my decision, and we were both pleased with our selection. The first pint hardly touched the sides, but subsequent pints revealed a deep golden coloured and extremely well-hopped ale, served nicely chilled and good value at only £2.80 a pint.

The Amazon and Tiger (named after two species of butterflies), is an un-assuming looking pub, that was deliberately built back in 1914, to look like a private house - so as not to offend worshipers attending services at the nearby village hall. It is divided into several different drinking areas and is the sort of pub I would like as my local. We watched the first half of the England game and stayed for the start of the second. However, we still had a fair distance to cover, so reluctantly we departed this excellent village pub and made our way towards Wrotham Heath, where we had booked accommodation for the night.

We were foot-sore and weary by the time we reached our destination, and after a shower and change of clothing set off in search of somewhere to eat and drink. I knew that there was a large Hall & Woodhouse pub in the village, but the B&B proprietor warned that it was the other side of the motorway, and therefore a fair trot. We settled instead for the Royal Oak, a large roadhouse and former motor-coach stop that is now a Beefeater Inn. Not expecting much, if anything, in the way of decent beer, we were pleasantly surprised to discover Old Hookey on tap, and what more it was in good condition and selling at £3.00 a pint. We opted for this, and settled down for a few pints and a well deserved meal.

Tonbridge was our destination the following day, and as our route took us through the tiny village of West Peckham, the Swan-on-the-Green, with its excellent home-brewed ales, was the natural choice for a lunchtime stop. We sat outside, limiting ourselves this time to just the two pints. I tried the 3.6% Fuggles, followed by the 4.0% Trumpeter; both were excellent.

It was a long and, at times, quite dull section of walking that eventually brought us back to Tonbridge shortly after 7 pm. The final 4 mile section along the Medway was an absolute killer, particularly on the feet, and by the time we arrived in the town we were just about ready to drop. We called in at the Humphrey Bean, our local JDW outlet, and were pleasantly surprise to bump into a couple of friends there. Later we were joined by a third mate, so we settled down to enjoy a few well-earned pints and to catch up on the local gossip. The beer range wasn't all that inspiring that evening, but the Everards Tiger was pleasant enough and certainly helped to assuage a king-sized thirst!

I met up with Eric the following morning, after a good night's sleep, in my own bed. We followed the course of the Wealdway from Tonbridge Castle, along the Medway, before turning off towards Hayesden. We then began a steep climb up to Bidborough Ridge, on what seemed like the hottest, and most humid, day of the year so far. Ignoring the Hare & Hounds in Bidborough Village and the George & Dragon in Speldhurst (to say nothing of the closed, and much missed Beehive on Southborough Common), we eventually reached the imposing Chafford Arms, in the small village of Fordcombe.

The Chafford is one of those pubs I keep meaning to visit more often, but never quite get round to doing so. Our late lunchtime stop showed me just what I had been missing. For a start the pub still has a traditional Public Bar, and dressed in our hiking gear this seemed the ideal choice. Harvey's Best and Larkins Traditional were the beers on offer; we both opted for the later which, although only 3.4% in strength, certainly hits the spot so far as taste is concerned. Three thirst-quenching pints later, and some interesting conversation with the landlady and her locals and we were on our way again. I forgot to take some photo's of this excellent village local, but check out the pub's website here.

Heading roughly south-west, through some very pleasant rolling countryside, we eventually dropped down towards the Sussex border. After passing under the Uckfield Railway line, we deviated slightly from the Wealdway and instead joined the Forest Way which follows the course of the former Tunbridge Wells to East Grinstead Railway line. Although the path was flat, it was very hard going on the feet, and we were glad when we finally turned off across the grassy meadows towards the tiny village of Withyham, our resting place for the night.

Withyham is home to one of my all-time favourite pubs, the unspoilt Dorset Arms, and on our arrival in the village we called into this tied Harveys house for a well deserved pint, and also to collect the key to our bed and breakfast accommodation opposite. Like the Chafford Arms earlier in the day, the Dorset Arms also sports a traditional public bar, alongside a large, comfortable restaurant. During the winter months the bar is heated by a large open fire, but in the fierce mid-summer heat the doors were wide open, a labrador lay stretched out on the floor, and the bar resounded to the sounds of easy going banter that is the hallmark of a good pub.

After a quick shower and change of clothing at the B & B opposite, we returned to the Dorset for several more pints of Harveys (the company's summer seasonal, Olympia, was in particularly fine form). We also enjoyed an excellent steak and ale pie; the steak being cooked to perfection and just melting in ones mouth. It is comforting to know there are still unspoilt, traditional pubs like the Dorset around, and although it is probably over 10 years since my last visit, I was relieved to find that nothing much had changed.

After a hearty breakfast the following morning, we left Withyham to complete the final stage of our walk. The weather was again hot and humid, so we were glad of the shelter provided by the trees of Five Hundred Acre Wood (of Winnie-the-Pooh fame!). Eventually though we emerged from the trees onto the wide open heathland of Ashdown Forest. Here there was precious little shade to protect us from the fierceness of the sun, but fortunately there was a cooling breeze blowing.

We passed Camp Hill, the highest point on the Forest, before starting the long descent on the other side. Passing through mixed heathland and woodland we found ourselves close to the village of Fairwarp. I knew there was a former King & Barnes pub there, but would it be open? A group of walkers we'd met going in the opposite direction, assured us it would be but after diverting off the Wealdway into Fairwarp and seeing the opening times posted outside, we discovered to our horror that the pub (the Forester's Arms), was closed for the afternoon. There were two women sat at a table outside, one of whom turned out to be the landlady. Having watched us struggle up the hill, with full rucksacks on our backs, she took pity on us and opened up for us to buy a quick pint. The Badger First Gold tasted especially delicious after that, and thirsts quenched we were soon on our way.

After getting lost in a wood, and having to make a slight detour, we eventually ended up in Five Ash Down, which is just outside Uckfield. We were debating whether to call in at the Pig & Butcher in the village when we spotted a Tunbridge Wells bound bus heading our way. We decided to leave the Pig & Butcher for another day, and after flagging the bus down were soon on our way back home.

Three quarters of an hour later we were ensconced in the Grove Tavern, enjoying some quality Timothy Taylor's Landlord in the company of a group of friends from CAMRA, in this most excellent Tunbridge Wells local. This proved to be a fitting end to what had been a good, but rather tiring walk, which had the added bonus of allowing me to re-visit some really choice pubs.

We still have another 32 miles left to follow the Wealdway to its finish at Eastbourne, but that's for another day!
Posted by Paul Bailey at 21:38