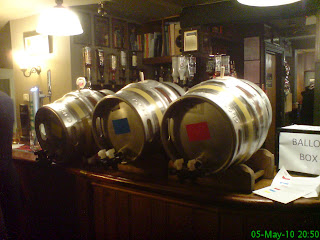 Breweries in West Kent are like buses; you wait ages for one to appear and then three come along all at once!

After attending a sampling of Moodleys new beers the other week, last night I was one of a number of people invited to a tasting of beers brewed by the new Royal Tunbridge Wells Brewery. The tasting was held at the Sussex Arms, in the Pantiles area of Tunbridge Wells. Those of us of a certain age remember with fond memories the old Sussex Arms, when it was run by Dennis and Barbara Lane. The pub was something of an institution in the town, and could rightly be described as a pub of character that was full of characters!

All that changed 20 years or do ago, when much of the Pantiles was "gentrified" (re-developed for the worse). Dennis and Barbara retired. The Sussex was gutted and given a complete re-fit, and after being taken over by Greene King, became something of a young persons pub. I must say that the stark re-fit it received has mellowed over the years, and I was surprised to find myself quite liking the place..............but I digress!

To return to the RTWB and its beers. Roughly 30 years ago, there was a company operating just outside the town, under the Royal Tunbridge Wells name. I remember visiting the brewery and buying a polypin of their Best Bitter one Christmas, but after several changes of ownership the company ceased trading. The brewing plant was bought by Bob Dockerty, when he set up Larkins Brewery, and ironically I saw it in action earlier today, when I called round for a chat with Bob, in my capacity as Larkins BLO.

The new RTWB is the brainchild of drinks consultant, Simon Lewis. He also has on board with him Ian Dorman, who was one of the partners in the original brewery, and Ian was present last night, along with some artifacts from the original brewery. When I arrived at the Sussex there were three casks stillaged on the bar, with their taps facing the customers' side. Simon told us to take a glass, together with a poling card. plus tasting notes, and help ourselves. The poling card was appropriate, given that we were just one day away from the general election, and to help us make our choice, the casks were marked Yellow, Red and Blue.

The Yellow cask contained a 3.6% Blonde beer, which many of us thought needed a bit more refinement, but no such allegations could be laid against the Red and Blue offerings. The former was a 3.8% Ordinary Bitter, whilst the latter was a 4.1% Best Bitter, said to be based on the beer of the same name brewed by the original RTWB. Both beers were well-hopped, and well-balanced, but unfortunately having written my comments on the tasting notes and then popped them into the ballot box, I neglected to pick up an additional copy for my personal information. I therefore am unable to give as much information about the beers as I would have liked, apart from saying that the Red and the Blue will both go down well in local pubs. I am certain too that, given time and a bit more development, the Yellow will also be a welcome summer seasonal beer.

The general election "theme", combined with the comments we made on our tasting notes, will provide Simon and Ian with valuable feedback on the beers, and we were also shown examples of potential artwork for pump clips and other brewery advertising material. The whole event therefore, was a clever and well-thought out means of gauging public opinion from both local landlords and drinkers alike. From the pictures I've seen of the brewing kit on the company's Facebook page, this looks like a well set up, and well thought out operation, and like many fellow drinkers in the area I look forward to sampling the brewery's wares, in local pubs, within the not too distant future.
Posted by Paul Bailey at 20:52

I read about these in the paper and sent them an email. Shame they didn't let me know about last night as I would've liked to attend - I like the idea. Interesting to see what happens next with them and the beers!

You could have just turned up Mark. I'm sure that not everyone present the other night had an official invite, and there was plenty of beer to go round.