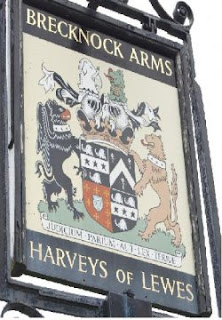 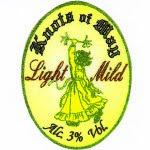 18:58 train from Tonbridge, alighting at Frant 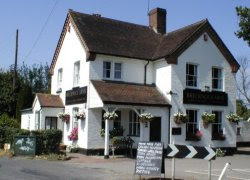 station, and then walked the short distnce up to the pub. On the way we called in to the newly opened village shop; it's always good to see a shop opening in a village (or indeed anywhere), as it's normally the other way round. Suitably laden with purchases to nibble on the way home (Kettle Chips and the like), we wandered up to the pub ready for some serious enjoyment of Harveys.

The pub was busy; the village cricket team had just finished their game and the place was full of thirsty cricketers keen to quench their thirst on some of Lewes's finest. Most of the team though were outside, taking advantage of the unusually hot May weather, so we had no trouble in finding a table. The latter was important, because we wanted somewhere to spread our maps and guide-books out; the main objective of the evening being to sort out the route, and stages for our latest long-distance walk. After succesfully completing the South Downs Way last year, my friend Eric and I are planning to walk the Wealdway. This is a slightly shorter footpath that runs from Gravesend, on the Thames Estuary, to Eastbourne on the south coast.

By the end of the evening we had sorted out the itinerary and accommodation stops for the first four days of the walk. This will take us through Kent and well into Sussex following a southwards course, initially across the North Downs and the Greensand Ridge before crossing the main part of Ashdown Forest, in the centre of the Weald. In between studying maps and guide-book, we kept ourselves well lubricated with some of the excellent Harveys Best, which landlord Joe always keeps in absolute tip-top condition.

For those not in the know, the Brecknock Arms is a Harveys tied pub in the middle of Bells Yew Green, a small village a few miles south east of Tunbridge Wells. It is easily reached by train from the latter, and also from Tonbridge, where I live. Confusingly, the nearby station is called Frant, even though Frant village is about a mile and a half away. The pub underwent a bit of a refit just over a year ago, which resulted in moving the bar back, and providing a connection between the two former separate bars. The Brecknock is a real community local, and being on the national rail network also attracts its fair share of visitors from further afield, of which I am happy to include myself.

Joe and his partner Charlotte, have been at the pub for a couple of years now, having taken over from the previous, long-serving tenants. They serve good quality food, from a varied menu, and also usually feature one of Harveys seasonal ales. On Saturday, Knots of May Light Mild was on sale alongside the Best Bitter, but this 3.0% beer is a bit on the weak side for my taste and even though we sank quite a few pints that night, the Best Bitter was just perfect.

Much earlier in the year we held our Good Beer Guide Selection Meeting at the pub, and seeing as the meeting took place on a Sunday lunchtime, many of us went for the option of Sunday lunch first. It was a freezing cold January day, and the Harveys Old Ale we enjoyed that day, alongside the Fullers London Porter, which was on as a guest ale, were just the ticket. All of this proves that whatever the season, the Brecknock is definitely a pub that is well worth seeking out.
Posted by Paul Bailey at 13:42

Presumably Fullers brew London Porter all year round now? It is a beer I love but not sure I'd want to drink it in warmer weather.

I'm not sure about London Porter being brewed all year round Paul. It was back in January when the Brecknock had it on, and it was just the thing, given the cold weather.

I suspect there are batches brewed regulary for keg and bottle packaging through the year. It a winter seasonal in cask.