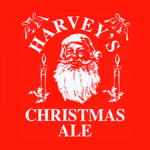 The inside back page of the latest edition of Beer Magazine (CAMRA's quarterly publication that is attempting to try and reach out to a new audience), carries a full page advertisement from JDW. The advert depicts pump clips for what it describes as the company's Christmas Ales. These will feature in Wetherspoons outlets throughout the Festive Season.

So far so good, except few to my mind qualify as genuine Christmas Ales. For a start only four of the 23 beers featured are above 5% abv, although I will grant you that both Batemans Rosey Nosey and Mauldon's offering, Bah Humbug are both just under at 4.9%. Back in the days when I had my Ale Shop, I received countless fliers (and phone calls), around this time of year from both regional indpendents and micro's promoting their seasonal offering. Inevitably the beer would be named with an awful pun - you know the sort of thing "Good 'Elf", "Sleighbells", "Christmas Cracker", ad nauseum, but most would fail to deliver in terms of taste. Very few were dark in colour, but instead were just some bog standard brown brewery bitter done up with a fancy name.

So far as I can make out, the selection that Wetherspoons are offering this year is very similar to what I have just described. The awful puns continue, including Elgoods "Snickalmas", Caledonian's "Escape Claus" and Nethergate's "Frank Incensed" - the pump clip for which features an angry looking bloke, with his sleeves rolled up chasing after Father Christmas. This really is scraping the bottom of the proverbial barrel! Smiles "Turkey's Delight", which weighs in at a feeble 3.8%, is also taking the biscuit!


The list does feature Hook Norton's excellent Twelve Days, and also Greene King's Abbot Reserve. The latter though, whilst delivering in terms of both strength and taste, is not a true Christmas Ale, although we should perhaps be thankful it too has not been given some fake festive name.

The one genuine Christmas Ale that really does it for me is the seasonal offering from Harveys. Simply titled Christmas Ale, this rich, warming, yet well-hopped beer certainly packs a punch at 8.2%. Furthermore it is brewed well in advance of Christmas, with real care and devotion. Proof of this is the beer is allowed to mature in a vat, over a bed of fresh Golding Hops. The final result is absolutely stunning and knocks spots off most of the fake, gimmicky, so-called Christmas Ales described above. If you are lucky enough to find yourself in a pub selling this stunning beer, treat yourself to a half and you will know what I mean.

I've got a bottle of Harvey's Christmas Ale from last year. Soon be time to crack it open me thinks!

The bottled version is good, but the draught is even better! Only trouble is it's difficult to track down. Enjoy yours Paul, when you get round to opening it.