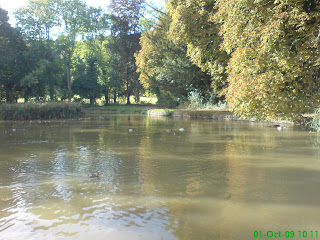 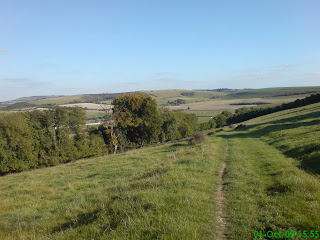 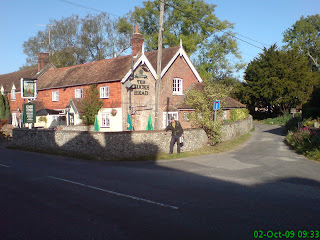 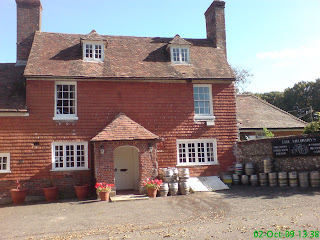 My travelling companion and I arrived back late last night. We had spent the day in Winchester, visiting its historic sites, as well as some of its finest hostelries and generally just soaking up the atmosphere of this attractive old town. On arriving back in Tonbridge we called in to what is rapidly becoming the most improved, and up and coming pub - the Punch & Judy.

We had spent two invigorating days walking the final stretch of the South Downs Way, arriving in England's ancient capital just before 6pm on Friday evening. The weather had been glorious, the scenery and the views superb. We had visited some excellent pubs, drank some fine beers, eaten some good food and, most importantly, met some really interesting people.

Our walk had started at Buriton, an attractive, two-pub village close to Petersfield, where we re-joined the trail. We walked through the partly wooded Queen Elizabeth Country Park before ascending Butser Hill, one of the highest points on the South Downs. We stopped at the summit and ate our packed lunch, before continuing our walk. Our route took us past the now closed HMS Mercury, a land-based naval establishment, as well as the Sustainability Centre, where we stopped and had an interesting chat with the person manning the entrance.

We traversed the Iron-Age hill-fort of Old Winchester Hill, before beginning the long descent down into the Meon Valley. We had overnight accommodation booked at the Bucks Head in Meonstoke, but en-route we passed through the neighboring village of Exton. As it was approaching 6pm we made a bee-line for the strangely named Shoe; an imposing Wadworth's pub. Despite having seen two thirsty travellers waiting outside, mine-host wasn't that keen on opening on time, and when he did the welcome wasn't the warmest I've ever received. The Cask Marque accredited 6X was in fine form though, and made up somewhat for the indifference of the barman.

The welcome we received at the Bucks Head was far more friendly, and although the pub is tied to Greene King, the Old Speckled Hen was in tip-top condition. After a much needed shower and a change of clothing, we settled down for the evening to enjoy several more pints plus a hearty meal. We were both very impressed with the Bucks Head. It still functions as a true village pub, and what's more still has two separate bars. The local Young Farmers were holding a meeting in the Public Bar, so we stuck to the cosy and comfortable Saloon. The next morning, over breakfast, we looked on whilst the landlady provided coffee and bacon rolls for an early morning party of shooters, before they set off for their day's sport.

It was bright and sunny when we left Meonstoke, and by the time we had climbed out of the Meon Valley, via Beacon Hill, we were both quite hot and sweaty. A bit further on we made a most welcome lunchtime stop at the Milbury's Inn, near Beauwworth. I was expecting a somewhat up-market establishment, so was more than pleasantly surprised when we stepped inside a low-ceilinged old inn, complete with flagstone floors and a log fire burning away in the grate. Three cask ales were on sale, all drawn by gravity direct from the cask. We sampled the Goddards Ale of Wight plus the Palmers Copper Ale. The former was perhaps a little bit past its best, but the Palmers was in excellent condition.

The Milbury's is named after the nearby Mill Barrows, which are some Iron-Age burial mounds. It was formerly known as the Fox & Hounds, and one feature of its obvious antiquity is the 3o0 foot deep well, adjacent to the bar, that has been dug by hand down through the chalk. Next to the well is a large tread mill which, according to the guide book, was worked by a donkey to draw water up from the well. The bar-maid gave us some ice-cubes to drop through the grating at the top of the well. They took just over 4 seconds to make a splash in the water far below!

We had a light lunch, plus an interesting chat with the landlord and his some of his locals, before reluctantly departing to continue with our journey. We were both agreed though that the Milbury's had been not only the find of that stretch of the walk, but probably the best pub of the entire South Downs Way.

We were told at the pub that it was a three hour walk to Winchester. Although we could clearly see the city after this time, it took us another hour to reach the city centre. The weather, which up until now had been warm and sunny, started to cloud over. The wind got up and it began to feel a trifle chilly. We began the long descent from Cheesefoot Head, and then down through the village of Chilcomb. As we approached the footbridge over the noisy and extremely busy M3 motorway, we stopped for a chat with a woman who had been walking her dogs. She offered to show us a short cut into the city, and to direct us to a pub where we could rest our aching limbs, refresh ourselves with a pint or two of beer, and study the town map for directions to our bed and breakfast accommodation.

The pub turned out to be the Black Boy, a centuries old rambling old inn with a series of inter-connecting rooms. it was definitely one of Winchester's best alehouses. I will be posting a separate article on our stay in the city and describing some of the other excellent pubs that we visited.
Posted by Paul Bailey at 21:38