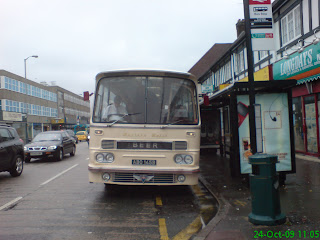 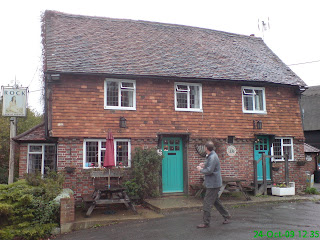 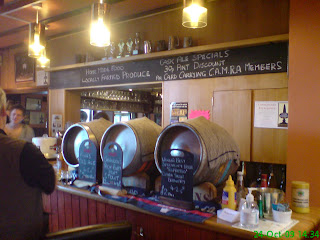 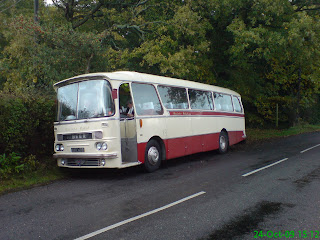 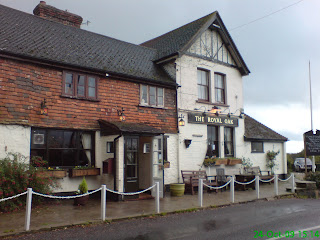 Saturday's tour of some of the more remote pubs of West Kent and East Surrey was a great success. Despite the rain, our vintage coach turned up on time, and we were transported through the leafy lanes around Edenbridge and Lingfied to some splendid rural hostelries.

We started at the Rock, an unspoilt rural gem on high ground to the west of Penshurst. "Bandit country", was one comment heard on the coach as we climbed up through the woods, and then down through a cutting made in one of the sandstone outcrops that makes up this part of the High Weald. The tiny hamlet of Chiddingstone Hoath, where the Rock is situated, certainly is in the middle of nowhere, although the only "bandits" are the super-rich who inhabit many of the very attractive, upmarket, converted cottages and farmhouses in the vicinity.

I have written about the Rock before, with its floor of well-worn bare-bricks, and its unusual hexagonal wooden hand pulls on the bar, but it seems changes are afoot. For many years the pub has been tied to Larkins Brewery, but at the end of the month, the lease runs out and Larkins will not be re-newing it. We have been told that the pub will be closing for a while to allow renovation work to be carried out. These works include installing a new kitchen and upgrading the toilets (whatever that means!). It will the re-open as a free house. Hopefully not too much else will be altered, otherwise the Rock could lose its essential character.

We all managed to squeeze into the Rock, and sample both the Larkins Traditional and the stronger Best Bitter, before re-boarding the coach and heading off to our next destination. The Royal Oak, at Staffhurst Wood was a new pub for most of us. It is situated on the other side of Edenbridge, just over the border into Surrey. Although the rear of the pub is given over to dining, the Royal Oak is still very much a traditional country pub. The bar is sited at the front of the building, and alongside the regular beers of Harveys, Larkins and Westerham, perched up on the bar were three casks containing dark ales. These were Kings Old Ale, O' Hanlon's Port Stout and Dark Star Espresso. What made these beers even more attractive was their price of just £2.00 a pint. The landlord later revealed the strategy behind this promotion, the idea being to give his regulars something a bit different to try, at a price well below what he would normally charge. As he said to me, "at this price I know I will sell the cask(s)", (normally he has just one on). "If I sold them at the same price of my other beers, the danger is that I would end up having to pour half of the cask away". This "loss leader" is an excellent idea - other landlords please follow suite!

Most of us had pre-ordered a meal, and my Suffolk Pie (bacon, leeks, cheese, potatoes and mustard) was both filling and tasty. The rain had given over by the time we left the Royal Oak, and whilst the next pub was not that far as the crow flies, by road it took the best part of 30 minutes. The pub in question was the Wheatsheaf at Marsh Green, an old favourite of the branch and a perennial Good Beer Guide entry. Landord Neil, had laid on a good selection of beers for us, including Tripple fff Alton's Pride , O ' Hanlon's Firefly and two seasonals from Harveys - Old Ale and Star of Eastboune.

Continuing the dark theme, I was straight in on the Harveys Old - one of my all time favourite dark beers, and the first of the season so far as I was concerned. We didn't seem to have much time in the Wheatsheaf; either that or I was talking too much! I was just about to order myself a half of Star of Eastbourne, when our tour leader announced it was time to get back on the coach and head off for the final pub of the trip. There was just enough time to thank Neil for the excellent range of beers he had provided for us before we were off.

It wasn't far to Cowden Pound and the Queens Arms, aka "Elsies"; our last port of call that day. We just about managed to fit inside this unspoilt, CAMRA National Inventory-listed, time warp pub. Fortunately Elsie's helpers had opened the other, larger, but rarely used left-hand bar. For many of our MMK colleagues, this was their first experience of the Queen's Arms and they weren't disappointed. Elsie only sells the one draught beer, namely Adnams Bitter and of course no lager at all! She put in an appearance, sitting behind the bar whilst her two lady helpers coped admirably with keeping our glasses re-charged.

We finally arrived back in Tonbridge around 7pm. After saying farewell to our Maidstone colleagues, a few of us adjourned to the nearby Punch & Judy, which is fast becoming south Tonbridges's best watering hole. Harveys Best and Hobgoblin were the beers on offer. I only stayed for one, as it had been a rather long, but very enjoyable day out.
Posted by Paul Bailey at 16:34