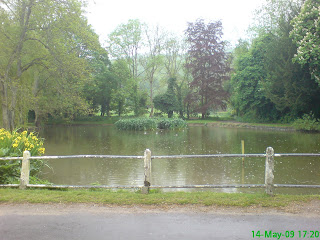 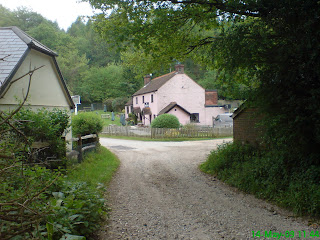 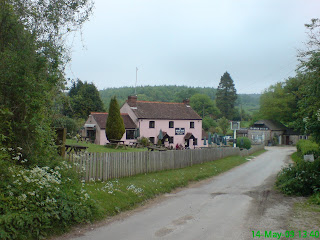 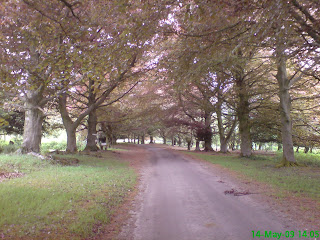 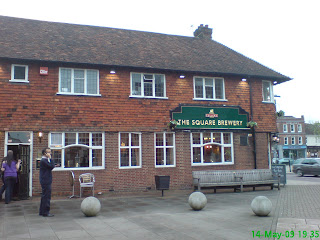 The last day of our walk along the South Downs Way saw us visiting a real gem of a pub, and one that I had wanted to return to ever since my first trip there back in 1983! The Royal Oak, at Hooksway is an isolated old inn that is reached by road via a narrow track off the B2141 just north of Chilgrove. I remember being taken there one Sunday lunchtime, by my former in-laws twenty-six years ago, and marvelling then at just how busy this basic, isolated pub was. Whilst planning our trip earlier in the year I looked the pub up in an old CAMRA Sussex Beer Guide, and then did a web search on it. I was delighted that it looked much the same as I remembered it, and this was confirmed to me by a fellow CAMRA member who had visited the Royal Oak during his time in the T.A. He had been walking the South Downs Way, with a group of fellow soldiers, and the landlord had allowed them to camp in the field opposite the pub.

Eric and I had little trouble finding the Royal Oak. We diverted off the trail and began a long, slow descent through the woods, eventually reaching a clearing, and there it was before us. Our fears that the pub would not be open (it was still only quarter to twelve!), proved unfounded, and after removing our muddy boots we entered inside.

We received a warm welcome from the landlord and were soon downing the first beer of the day - Sharps Doom Bar. The current landlord, who has been at the pub for the past 20 years, is only the third licensee at the Royal Oak during the last 100 years. The pub was lit by oil lamps for most of the 20th Century, with electricity only being installed during the mid 1970's. Even today, the pub's water supply is drawn from a well, deep underground.

After a light lunch, and a further couple of pints, it was time to bid farewell to the Royal Oak and rejoin the trail. We still had a fair way to go to the village of Buriton; the end of this particular stretch of the walk. We also had to get home that evening as well! We made our way back to the South Downs Way, rejoining the path via a long dry grassy valley. For a while the trail follows the line of the escarpment, and we were rewarded by the sight of the village of South Harting below us. This village was the official end of the trail until 1989, when the SDW was extended to Winchester. We therefore felt that we had at least walked the original South Downs Way!

Pressing on through woodland, and then descending into rolling countryside, which consisted mainly of arable farmland, we passed along a succession of flint tracks, which were very hard on the feet, and then on to a couple of metalled by-roads. Eventually we broke away from the trail and descended via a steep, narrow chalk track and then across a couple of grassy fields to our goal, the attractive village of Buriton. As we walked across the fields, the rain, which had been light, and intermittent since leaving the Royal Oak, suddenly came on a lot heavier. We weren't worried, we had reached the end of our four day walk without having to don our waterproofs, so a drop of rain wasn't going to bother us now!

There are two pubs in Buriton, but unfortunately there was another half-hour or so to go until opening time. We needed to get to Petersfield, where we could catch a train to London and then home. We had missed the last bus from the village, but at the B&B the night before I'd had the foresight to pick up a card with the number of a local taxi firm. A quick call, followed by a short wait saw our saviour in a taxi arrive, and transport us the three miles or so into Petersfield (I don't think either of us could have walked this additional distance at this stage).

Our driver dropped us at a Fullers pub, called The Square Brewery, right in the centre of town. He said that it was one of the best in Petersfield, and he wasn't far wrong. The Fullers Discovery was cool and refreshing, and we then moved on to the Gales HSB. Walking up to the station, we stopped for fish and chips, which we ate out of the wrapper whilst waiting for the London train. An hour or so later we were at Waterloo, and after a short hop across to Waterloo East we were on a train bound for Tonbridge. We didn't bother stopping for a pint when we got back; as I said in an earlier blog there just didn't seem anywhere appropriate!

A warm welcome back from the family, followed by a relaxing hot bath and I was ready for bed. It had been an excellent four days' walking, and we are both looking forward to completing the South Downs Way later in the year!
Posted by Paul Bailey at 19:59

You've just reminded me that my batch of London Pride is due to be delivered any minute now - Incidentally, its namesake, the play, on only a few miles from here. Let's call it synchronicity.

Philip, click on the link to the Royal Oak, Hooksway as there's a story there about their pub ghost.

Thanks Paul, I have added it here: Royal OakI may have a look down there one day.