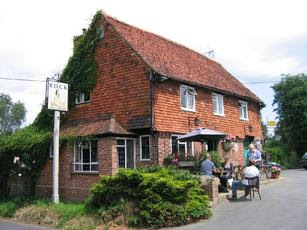 Unlike past New Year's Eve's I not consumed a lot of drink, and had also gone to bed at a reasonable hour. The result was that I felt pretty much ok the following day, so it seemed a good idea to take a drive out to the countryside in this unspoilt corner of Kent and visit a few local pubs. My son was at work, and my wife and sister had decided to hit the shops, so this left just me, plus my brother-in-law Ernie, and 14 year old nephew Jack as we set off to sample some of Kent's finest.

Our first port of call was the Spotted Dog at Smart's Hill near Penshurst. Although a bit of an eaterie drinkers are still made to feel welcome, and with beers from Larkins, plus low beams and warming log fires, what better place to take my American guests. My nephew couldn't believe people lived in such a small and isolated place with just a few cottages, a chapel (now converted to residential use) and the pub. Another thing I like about the Spotted Dog is that it has it's own Farm Shop attached. This stocks all manner of local produce and is a good example of a pub showing both enterprise plus support for the local community.

The beers were good too, with both Traditional and Porter on offer from Larkins, plus a beer from Cornish Brewers - Sharps, whose name unfortunately escapes me. As I was driving I stuck to halves, but from the Spotted Dog we set off for what is one of my favourite pubs, passing en route another excellent hostelry - the Bottle House, also at Smart's Hill.

The pub in question was the totally unspoilt Rock Inn at Chiddingstone Hoath, which if anything is even more isolated than the Spotted Dog. The Rock belongs to the local Larkins Brewery and is their only tied pub. With its floors of well-worn, bare-brick, low-beamed ceilings and log-burning stove ablaze in the large fireplace it too was another place to impress the visitors. My brother-in-law is particularly fond of dark beers, so the Larkins Porter did not disappoint. We bumped into an old friend of mine there as well, and this coupled with one or two other local "characters" made quite an impression on my nephew Jack.

Our last port of call was to have been the equally unspoilt Castle Inn situated in Chiddingstone village. Several of the old houses in Chiddingstone, including the pub itself, are owned by the National Trust and whilst the Castle is undoubtedly expensive it is a fine example of a village inn that still serves its original purpose of providing good food and drink, plus a friendly welcome as it has done for the best part of 300 years.

In the end though we didn't go in, as my nephew was by now getting rather hungry. Car parking spaces also appeared to be somewhat limited, so with a bit of reluctance I turned the car round and headed for home. It was an excellent day out though and for my visitors a good taster of some of our finest local pubs.
Posted by Paul Bailey at 19:16