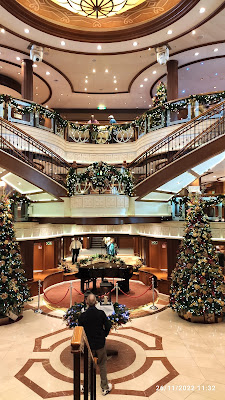 It’s the end of November and Mrs PBT’s and I have stopped for an overnight stay at a Southampton hotel in readiness to board our cruise ship, Queen Victoria, the following afternoon. Situated just five miles away from the docks, it’s a Doubletree by Hilton, and after an overnight stay, we shall be setting off for the cruise terminal shortly before midday tomorrow.

We enjoyed a good dinner in the hotel’s restaurant, with both of us opting for the pie option. They were steak and ale pies, from local butcher and pie maker, Upton’s of Bassett, and we both agreed that they were excellent. They had a filling of tender and succulent beef, encased in hot water crust pastry which, according to Mrs PBT’s, who knows about these things, is a rigid type of pastry, similar to the cold-water crust used for pork pies. It is designed to hold its shape, without becoming soggy, unlike the normal short-crust variety. She’s obviously been paying attention to the Great British Bake-Off! The following morning, with a touch of serendipity, our taxi drove us past Upton’s shop, on the way down to the cruise terminal– proof, if it was needed, that you can’t get much more local than that! Beer-wise, I went for a bottle of Leffe Blonde, the best of a bad choice of exclusively bottled beers. It’s an age since I last drank a Leffe Blonde, as given the choice I would normally go for the darker Bruin, but it was pleasant enough, and was certainly a better choice than the bland international lagers that made up the rest of the range. Still, what else should one expect from a large, multi-national hotel chain? 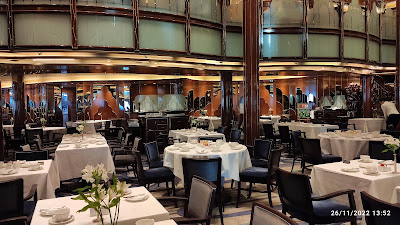 This was my first experience of a Doubletree hotel, in the UK, although I have stayed at one in the United States – the chain’s home country. The brand isn’t that dissimilar to other hotel chains and having experienced quite a few different ones over the years, there’s really not much to choose between any of them. One thing I didn’t like, was the non-discretionary 10% service charge, added to the bill, especially as this did not appear to be passed on to the staff. 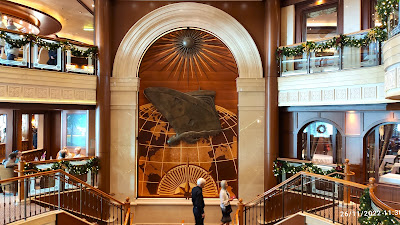 There was also a mix-up with the taxi transfer, booked the following morning, to take us to the cruise terminal. The receptionist had to chase the taxi company, who claimed they hadn’t received the email booking, and to make matters worse, the driver charged us for the journey, even though it was supposed to have been included as part of the booking. It wasn’t the cabbies fault, and he gave me a receipt, so I can take the matter up with Holiday Extras, when we get back, but it wasn’t the best of starts. 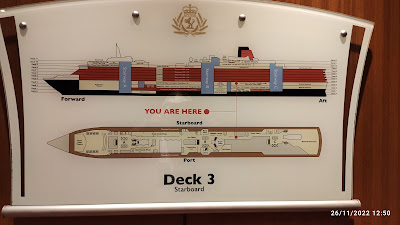 Fortunately, the embarkation experience was fairly straight forward this time around, although cruise ships have adopted the same security-screening procedures that make travel by air, such a pain in the proverbial. Fortunately, there was no need for us to take off our shoes, although removing one’s belt is a real nuisance. I suppose it makes sense in the general run of things, as the last thing anyone needs is a crazed lunatic, armed to the teeth, roaming around the vessel. 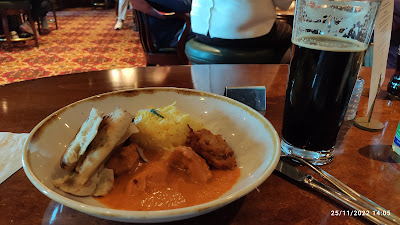 After attending at our muster station, and having our ship’s cards swiped, we were free to unpack, go for a stroll around the ship, and grab something to eat. Rather than heading up to the buffet, we slipped into the Golden Lion – the ship’s pub. Food is available there at lunchtime, although not in the evening, but meals in the Golden Lion are included as part of the cruise package. Drinks are not – no surprises there, but after managing to grab a table for two, we ordered food and drink for two. 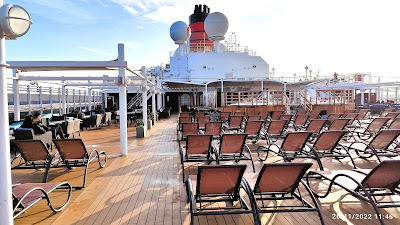 The food offering, amongst others, was a rather nice chicken tikka, which also came with naan bread, as well as saffron rice, and drink wise, I of course went for the excellent Cunard Black, a “breakfast stout,” brewed for the cruise line by Dark Revelation. I’ve enjoyed quite a few glasses of this excellent rich, dark beer on previous cruises, and looking around at some of the other tables, I was no means the only person drinking it. Mrs PBT’s went for a dessert after the main course, but I opted out, having enjoyed a cooked breakfast at the hotel, earlier that morning. We were lucky to have arrived when we did, as the Golden Lion started to get very busy – apparently there is some sort of football tournament going on in a small middle eastern country, and the game between the host nation, and an African team, whose name escapes me, was attracting a lot of attention. 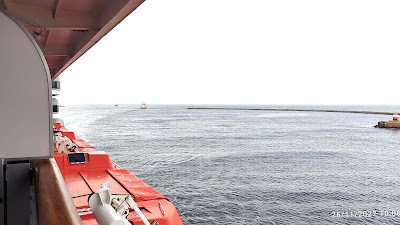 Our boat slipped its moorings, shortly before 5pm, and after turning around, we sailed off down the Solent, and out into the open waters of the English Channel. Sitting in the buffet bar, up on Deck 9, enjoying a spot of dinner, we could feel some slight movement from the ship. Eileen noticed it more than I did, even after clambering into bed, although I was dead to the world, and I slept like the proverbial log. The following morning, we were surprised to see how calm the sea was, with the swell of the previous evening having died right down. 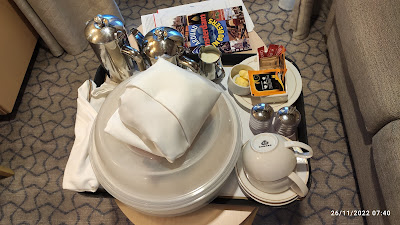 There was some confusion as to what time it was when we woke up, as the ships’ clocks were due to be advanced by one hour, to bring us in line with Central European Time. My phone normally performs this change automatically, as does my Smart Watch, but with no phone signal in the middle of the North Sea, this was unlikely to happen. I worked on the assumption that as our phones and watches weren’t showing any change, it was best to get up, although next time I shall bring an analogue watch along, to make certain. 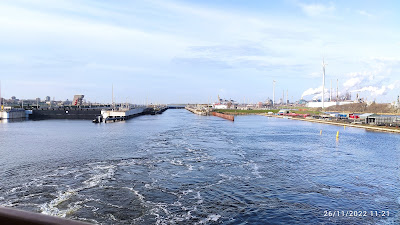 Soon after, there was a knock on the door, and the room service breakfast that Mrs PBT’s had ordered for us, the night before, was delivered to our room. I normally prefer a walk up to the buffet, or perhaps head for the restaurant, but I do know that the room service breakfast option on Cunard is very good, so on this occasion I enjoyed scrambled eggs, streaky bacon – American style, Cumberland sausage, a couple of hash browns and some toast. In short, the full Monty! 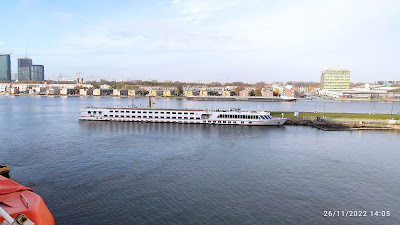 I took a walk afterwards, leaving Eileen to get herself ready, getting several circuits of the promenade deck under my belt. With all the food available on board, it’s important not to let things slip on the exercise front. It was quite bracing up on deck, although the south facing starboard side was quite sheltered. It was also quite sunny, and surprisingly warm, especially for the time of year. 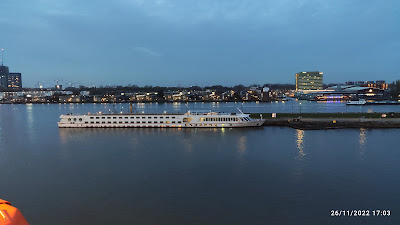 A couple of days before we set sail, I’d received an email from Cunard, with the heading “Important Announcement about Your Upcoming Voyage.” My first thoughts were along the lines of “Oh no, what now?” So, thinking there had been a change of plan, or the voyage had even been cancelled, I was more than a little relieved to discover that whilst there had been an alteration in the travel arrangements, but it was a change to the good. Now, instead of spending one night in Amsterdam as originally advised, we would be staying for two. There would be no change regarding the disembarkation arrangements, meaning we would still be leaving the ship on Tuesday morning, as advised. This was good news as we would now have more time to enjoy the Dutch capital.