I call that a bargain! 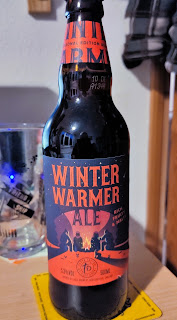 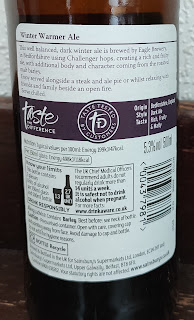 I picked up a couple of these bad boys at our local Sainsbury’s, the other weekend.  On sale at the heavily discounted price of just 80p each, the beers were too good a bargain to miss. Somewhat predictably, there were none left on the shelves when I popped in yesterday to grab a few groceries, but why were these bottles so ridiculously cheap, and what was the beer itself actually like? 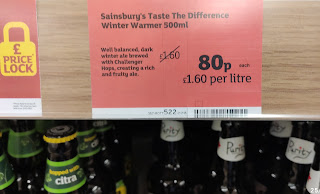 Sainsbury’s Taste the Difference Winter Warmer Ale weighs in at a respectable strength of 5.3%. It is brewed at the Eagle Brewery, which I suspect is the old Charles Wells plant in Bedford. The beer is described as “Rich, fruity and malty,” which is not an unreasonable description for a “Winter warmer” and the taste did actually match the description. I originally tried this beer, last December when it was on sale alongside another beer from the Eagle Brewery.  This Christmas Porter was brewed to the same strength as the Winter Warmer, and looking back at my notes on Untappd, I gave it an appropriately higher score.

I wrote at the time that I could certainly discern the dark fruit, sweet plum, and chocolate, described on the label, so perhaps members of the beer-buying public, felt the same? The Winter Warmer Ale is still quite drinkable, and given the recent fall in temperatures, drinking the beer didn’t exactly feel out of place.

None of this explains why Sainsbury’s are so keen to shift this beer unless their buyers caught a cold and over-ordered. There is still six months’ shelf life remaining on this particular batch, admittedly not quite sufficient to see them past this coming December, but should you come across these 80p bottles, the buyers’ extravagance becomes the consumers’ late-spring bonus.

See if you can spot any of this heavily discounted winter beer at your local Sainsbury’s, because at 80p a pop, you can’t really go wrong!

Looks like a rebadged version of Young's Winter Warmer, which is, of course, brewed in the same place (the now Marston's-owned Eagle brewery, Bedford). I'd have said that BBE date could happily be ignored.

I hadn't thought of the Young's-Wells connection Martyn, but it would make sense. Although it's a long time since I last drank Young's Winter Warmer, the colour and flavour profile appear to match.

I imagine, Sainsbury's over-ordered, hence the rather dramatic price reduction, but I agree the BBE could quite readily be ignored.