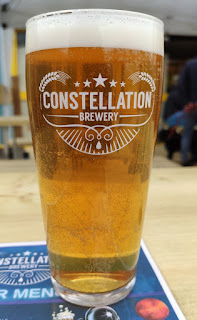 As promised, I made a visit to Tonbridge’s latest brewery, Constellation and, despite the unseasonably cold start to May managed to enjoyed a couple of the company’s beers, out on the newly installed outdoor decking area, at the front of the brewery.

I left my visit until late Monday afternoon, having taken advantage of the late appearance of the threatened Bank Holiday rain. Despite the rain staying away, there was a cold north-westerly wind blowing, but I managed to more or less finish what I’d set out to achieve in the garden, before heading out for a few well-earned pints.

The physical activities of digging, raking, and mowing kept me reasonably warm, but I knew that once I stopped moving, and sat down I would start to feel the cold. Mrs PBT’s called me a wuss for adding an additional layer of clothes – not that she’d set foot outside all day, but I was certainly glad that I did.

It’s quite a boring walk down to the industrial area where Constellation have set up shop, and the access road sandwiched in between one of the area’s largest haulage contractors and the town’s sewage works, is not particularly inviting, but according to my Smart Watch, it was less than a couple of miles – and that included a small detour to pick up some milk, from a local convenience store. 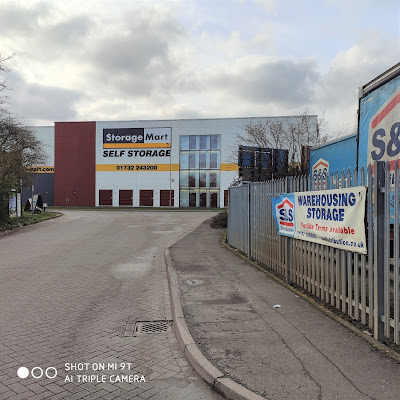 The access road opens out into the Orchard Business Park (why do developers insist on such inappropriate rustic sounding names for their developments? ), and it didn’t take me long to locate Constellation’s unit. Although there seemed to be quite a party taking place on the outside decking area, there were still several tables free.

As I made my way passed the brewery entrance, a chap came out to greet me and to hand me a beer menu. He turned out to be head brewer Rob, and he apologized for the rather noisy, but good spirited group, who were members of his extended family.

There were two cask and four keg beers on offer, so to start with at least, I opted for one of the cask beers. Indus IPA – Session Ale, pale in colour, well-conditioned and with nice refreshing, hoppy “bite” to it, turned out to be a good opening choice. It was very reasonably priced too, at just £3.40 a pint. 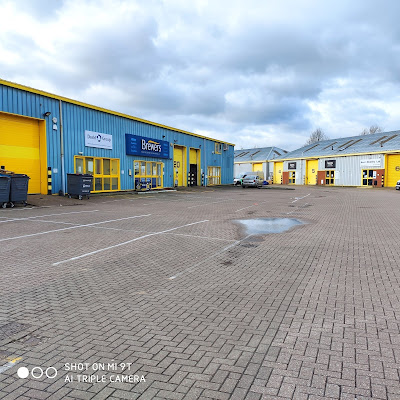 After bringing my pint over, Rob stopped for a brief chat, asking if I’d come far and how I’d found out about Constellation. Once I’d answered his questions, he told me a bit about his background along with that of his business partner, Barry.  Rob has 10 years’ experience working at another Kent brewery.  I won’t give the game away by naming it, but it isn’t in the immediate vicinity, and it isn’t one you might expect.

Barry’s background is in technical services and refrigeration, especially in relation to cellar services for pubs, bars, and restaurants. He will also be learning more about the brewing side, combining this with his cellar experience, to ensure that the final product will be poured to perfection.

Specialist companies, that take care of a pub or bars’ cellar requirements, are starting to emerge in both the UK and the Irish Republic.  My brother-in-law and I had a discussion on the need for such a service, as we sat in an Ohio bar one afternoon, wondering how it managed to stock such a large range of beers, and keep them all in good condition. 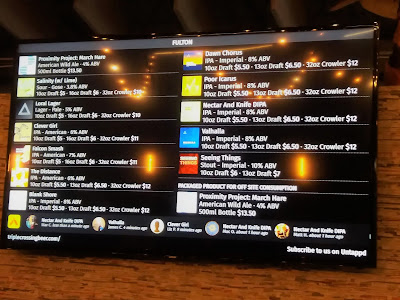 He wasn’t sure how this is handled in the states, and I wasn’t over sure about the situation here in Britain, but having the right cooling and dispense equipment, along with keeping the beer lines scrupulously clean, is of vital importance and can make or break a bar’s reputation.  I imagine this is the sort of service Rob’s business partner, Barry provides. Doing this, could also provide a convenient shoe-in, for Constellation beers.

I opted for something different for my second beer, choosing the brewery’s 4.7% Hydra Lager. Priced at £4.00, it was a thirst-quenching, full-bodied beer, constructed around a firm malt base. I mentioned to Rob that it reminded me a Czech Pilsner, and he replied that such a beer was exactly what he’d been aiming for. 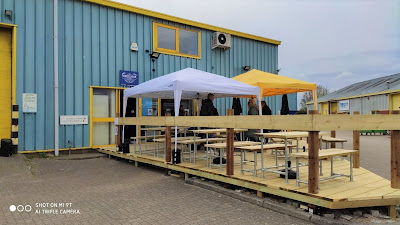 So, what are Constellation’s plans for the future? Pretty big, by all accounts, as they have opted for a 30-barrel plant, capable of producing up to 8,500 pints per brew. Starting off large negates the need to upgrade – a disruptive process as many breweries have found to their cost.

At the moment, the brewery is still testing the market, and finding its way. There are six core beers, and these will be complemented by seasonal and other more adventurous brews, as things progress.  They are certainly a welcome addition to the local beer scene, and this especially applies to their taproom.

I wish them well!

I wish them well, but those tap rooms on industrial estates aren't for me. however good the beer. I don't mind them on busy main roads (one in Wimbledon springs to mind) or under railway arches, but the plethora of brewery tasting rooms in metal boxes leaves me a bit cold and their owners are always wanting to talk about their beer and give you tours. Ugh.

Martin, micro-brewery tap rooms, on industrial estates, are never going to compete with traditional pubs, in terms of atmosphere and general appeal. Instead, they come into their own for toe wanting to purchase beer in slightly larger quantities (5 lite mini-kegs, or Carry-Kegs) for drinking and entertaining at home - barbecues, parties etc.

Surely there's nothing wrong with the owners wanting to talk about their beer - after all, that's what it's all about, and if brewery tours freak you out that much, you can always say no!

Beer is something you drink, rather than talk about, I always think 😉

If I didn’t know you better Martin, I’d say you were trying to wind me up. In my world, at least, beer IS something you can both talk about as well as drink, as long as you don’t do too much of the former.

Then you risk becoming a beer bore, and there are plenty of those around!