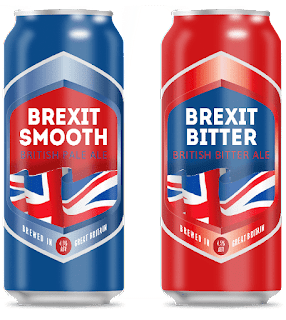 Somewhat predictably, and perhaps almost inevitably, there have been calls for brewers to produce a "commemorative beer" to mark Britain’s imminent departure from the European Union. The calls have come from a group of Conservative MP’s, led by Kate Griffiths, the newly elected MP for Burton-on-Trent.  Ms Griffiths called for a special “Brexit pint” to mark what she calls this historic moment.

In the House of Commons she asked the Brexit secretary to support her proposals. "Would my right honourable friend agree that to mark us leaving the European Union, our fantastic local breweries in Burton-on-Trent should brew a celebratory Brexit beer?"

Responding for the government, Stephen Barclay said: "Mr Speaker from the reaction of the house my honourable friend strikes an extremely positive note. I know her constituency is famed for its beer and am sure many members of this house would welcome them celebrating this occasion in such a way.” 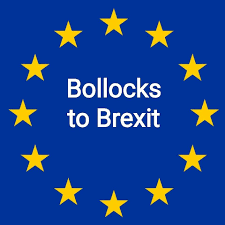 Not everyone in the House of Commons agreed, with the Scottish National Party in particular, less than impressed. Their spokesman said that “Brexit would not be a moment of celebration for many people across the UK, but rather a moment of considerable concern.”

Unsurprisingly I am in total agreement with the SNP.  Brexit is an unmitigated disaster, which has already cost the UK economy almost £70bn – the equivalent of around £1,000 for every person in the country, and no amount of flag-waving is going to change that. Like the event itself, Kate Griffith’s Brexit-inspired beer, is much more likely to leave a nasty taste in the mouth, than be a cause for celebration.

There are no sound economic reasons for us to be turning our backs on our nearest neighbours, in the world’s largest trading bloc; only ideological ones. The people behind Brexit are a relatively small, but rather cunning clique of right-wing, libertarian, ultra-free marketeers who, quite cleverly, managed to convince sufficient voters that the ills which afflicted large areas of the county, were due to our membership of the EU. 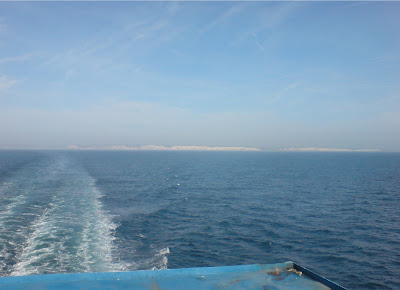 In doing so, they conveniently forgot to mention that the austerity measures introduced by a previous Conservative government, were the real reasons behind many of the nation's problems. These Euro-sceptics were aided and abetted by a hostile press that had spent the past three decades painting the European Union in the blackest of lights possible.

Given this background of suspicion and outright hostility,  the outcome of the 2016 referendum was hardly surprising, and that’s without taking into account the influence of the Russian government and the shadowy activities of groups such as Cambridge Analytica.

Given the narrowness of the result, the triumphalist calls  from MP's such as Kate Griffiths and Stephen Barclay, for a celebration, are at best insensitive and at worst damn right insulting! They ignore the fact that in the December 12th  general election, by a margin of more than one million, more UK voters backed parties calling for a second EU referendum than supported those arguing for withdrawal without a confirmatory vote. 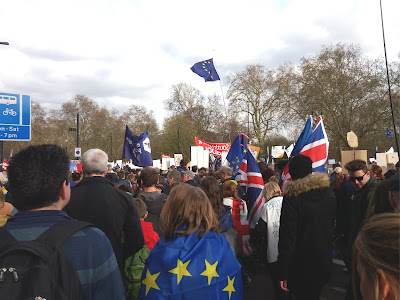 In addition, with less than three weeks to go before 31st January, a new poll has shown that voters are now split by the highly symbolic margin of 52-48 per cent in favour of Remain; the reverse of the result of the 2016 referendum.

I for one certainly won’t be celebrating on 31st January, and neither will I be buying any Brexit beer. The only consolation is that with this sorry event taking place in winter, the obligatory calls for Union-flag bedecked street parties, a good old fashioned sing-song and all the other jingoistic nonsense can safely be ignored.

The real reason why remain failed in the 2016 referendum was the failure to put forward a positive case for the UK to remain in the EU,if such a case had been put forward then the result may have been different. The outcome had little,if anything to do with Russians or some company from Cambridge as stated by you.

I agree with you John Lamb, about the woefully inadequate campaign that the Remain camp ran. The biggest mistake was allowing David Cameron to take charge, especially as many voters treated the referendum as a confidence vote in the executive.

I would also say that Vote Leave ran a far more effective campaign, as they knew that appealing to people’s emotions, rather than bombarding them with hard economic facts, was far more likely to succeed. Dominic Cummings, who is now Johnson’s special advisor, was largely responsible for this, but despite your dismissal of Cambridge Analytica, the deliberate targeting of voters from the lower-socio economic groupings, using illegally harvested social media detail, did play a significant role in the final result.

Cameron was on a hiding to nothing from the word go, given the amount of hostility towards the EU from the majority of the British press, but he foolishly allowed his over-inflated ego to convince himself that he alone was the man to deliver the right result.

I remain puzzled, given the narrowness of the result, as to why Theresa May didn’t go for a much softer Brexit, which involved remaining in both the customs union and the single market. This would have mitigated much of the economic damage resulting form cutting our ties with the EU. Instead May threw her lot in with Greasy Smog and the ERG, and went for the hardest of Brexits – a course which Johnson continues to pursue.

The other massive mistake was triggering Article 50 before any cohesive withdrawal plan had been drawn up, or any impact studies on the effect of leaving had been carried out. Only in Britain could you find such a group of total incompetents, and it’s no wonder that the rest of the world are laughing at how stupid we are.

I find the whole sorry affair extremely sad, especially when I recall the way Britain had emerged from the economic gloom of the banking crisis, and the confident way the country was moving forward towards a better future.

The sole reason Cameron called the referendum was to heal the division that had been festering in the Tory party. Instead he allowed these petty divisions to spill over and infect the whole country.

It doesn’t matter so much for people like me ,who are reaching the end of their working lives, but to deny young people the opportunities to live, work, love and study in any of the other 27 EU countries, is a gross betrayal of their future.

Brexit will go down as one of the most damaging and divisive episodes in Britain’s history, and I am truly sorry that I have been witness to it!

Thanks for a nice read Paul.

Once the 31st has passed, I look forward to the European Union moving swiftly, to promulgate Guy Verhofstadt's proposals - approved in principle by the Parliament - to enable the many millions of people in the UK such as ourselves, who have been deprived of our citizenship against our will and against that of our friends across the Channel, to continue to feel a bond with, and to be part of, the most enlightened, civilised and progressive project that this sadly blighted planet has ever seen.

Thanks Etu, for reminding me of Guy Verhofstadt's enlightened and generous proposals.

Yes, let's definitely bring it on!