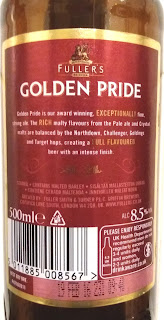 It seems hard to believe now that “Use By” and “Best Before” dates haven’t always been a feature of food labelling, but incredibly what most consumers would now view as eminently sensible, or even essential information, only made its appearance in 1970, and that was on a voluntary basis.

I am certainly old enough to remember the days before shelf life information first appeared on foodstuffs, even though I’m unsure how people consumers managed, and why there weren’t more instances of food poisoning.

We take these things for granted these days, and even drinks like beer have a “Best Before” date (BBE) somewhere on the container. One thing worth bearing in mind is that unlike a “Use By” date which is a safety warning to be heeded, a BBE  is only a guideline. The foodstuff might not taste as fresh if you exceed the latter, but it will not harm you.

I put this to the test the other day, when I came across a bottle of Fuller’s Golden Pride, with a BBE date of 19th Feb 2016, lurking in my cellar. (I haven’t really got a cellar, just a stack of beer crates and boxes, in the coolest part of the extension). Described as a “Superior Strength Ale”, and with an ABV of  8.5%, this high strength beer was nearly two years past its “Best Before” date. So was it still drinkable?

There was only one way to find out, and that was to crack open the bottle and taste the contents. The beer was still nice and clear, with plenty of condition. It had an attractive, deep amber colour, which was topped by a sticky-looking head. 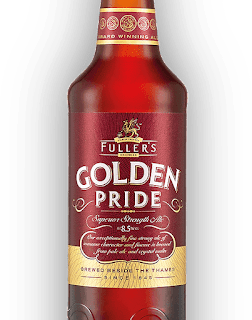 Taste-wise, the beer had taken on a distinct sherry-like character, which reminded me of Oloroso Sherry or Madeira wine. It still possessed a fair amount of residual sweetness, but it wasn’t cloying or unbalanced. It obviously wasn’t a beer for rapid consumption, but drank slowly over the course of an hours or so, it was quite pleasant.

The other surprising thing was this Golden Pride had thrown quite a sediment, despite it being a filtered and pasteurised beer. This resulted in the last couple of inches pouring with a bit of a haze, but the beer was none the worse for that.

I wouldn’t intentionally age a brewery-conditioned beer in this way, but it does prove that a beer of this strength is able to survive and remain perfectly drinkable, long after its BBE date has passed. Had it been a bottle-conditioned beer, then I feel it might have retained a bit more of its original character, but that’s not meant to be a criticism of  this particular bottle.

There is still another bottle left in my store; this time slightly younger, with a BBE May 2016, along with a bottle of Woodforde’s Norfolk Nip, ABV 7.0% BBE November 2015. I really must get myself a bit more organised!
Posted by Paul Bailey at 22:50

Are you sure it was pasteurised? Seems odd to me!

But yes, brewers are sometimes quite open about their battles with marketing or whoever, over how long they can stretch the best-before on the label.

Just took a quick look in my fridge. The beers from Austria have a date of 21 03 18 so I'm assuming that's a BBE (these are from my Steigl Advent calendar). Bottles from my Canadian Advent calendar have nothing. Nor do my cans (from one local brewery - local as in provincial), not do my Bombers (650ml bottles). The bottles of my favourite local (provincial) ESB show a date of October 18/2017, which is probably the bottling date since I just bought them last week.*

My bottles from a brewery in Quebec show a best before date.

Obviously it's not a rigid rule over here.

* - I highly doubt I've ever had a beer in my house that hadn't been consumed within a few months at the latest. ��

I’m not certain the Golden Pride was pasteurised Bryan, but it almost certainly is filtered. It would only need a few viable yeast cells to be present for them to slowly start multiplying, and over the extended shelf life of my particular bottle it’s perhaps not surprising that it threw a sediment.

Russ, it’s Eu law for all foodstuffs (and beer is definitely a foodstuff), to carry either “Use By” or “Best Before" dates. Mind you, if the UK does leave the EU and Mudge’s Kipper friends carry out their threatened “bonfire of EU rules and regulations”, then who knows?

"Mind you, if the UK does leave the EU and Mudge’s Kipper friends carry out their threatened “bonfire of EU rules and regulations”, then who knows?"

Tsk, tsk, hardly in the Christmas spirit my good man. :)

All I will say to that is not having it on my beer bottles doesn't bother me; and my wife runs her own sandwich/coffee truck. Thank goodness she doesn't have to do that over here. ;)

Perhaps my reference to Mudgie wasn't quite in the spirit of Christmas Russ, but I'm sure he's got broad shoulders.

When all's said and done though, it does make sense to have some indication of likely shelf life.

Yup, all of us beer drinkers have broad shoulders. :)

And I mostly agree with the shelf life (though my beer will never be in the fridge that long!). What gets my back up is the possibility of so many regs that only large businesses can afford to comply (but let's leave it at that in the spirit of the holidays).