Open at last - the Castle at Chiddingstone


Several days ago I reported on the good news that the Greyhound in Charcott, which closed its doors back in January, has new owners, and will be reopening at the end of next month. I am now pleased to announce that the Castle Inn, in the nearby, picture post-card village of Chiddingstone, reopened just under a week ago.

Unlike the Greyhound, which has only been closed for around three months, the Castle had been shut for almost a year, after the previous tenant handed back the keys, claiming the high rent he was being charged, made the pub unviable.

As the months dragged on, and with no signs of anything happening, rumours started circulating that perhaps the National Trust, who own the pub, as well as much of the village, were considering turning the place into a tea room. A former tenant was also asked for his views by one of the local papers, and he said the same thing about the unrealistic rent the Trust had been asking for.

The other rumours which came to light, during the months of closure, revolved around the state of the six-hundred year old inn. It was said that significant repairs were necessary in order to bring the building up to 21st Century standards, and that some of these repairs involved structural work.

Fast forward to last November, when the National Trust announced that after a lengthy selection and negotiation process, they had secured a new tenant for the Castle in the person of Nick Naismith.  I reported at the time that Mr Naismith had a good track record with regard to turning round ailing pubs, as a few years ago he rescued the Wheatsheaf  in nearby Bough Beech. I also mentioned that he is a director of Westerham Brewery; news which might not be particularly welcomed to local brewers Larkin’s Brewery, who are based just half a mile down the road from the Castle.

Larkin’s were known to have supplied around 80 per cent of the pub’s cask beer, prior to its closure, but as I hinted at in my article it ended up with a  the good old British compromise, with both Larkin’s and Westerham beers adorning the bar.

I discovered this when I popped in for a swift pint and a look around on Tuesday lunchtime. The Castle had opened five days previously, but I thought it prudent to postpone my visit for a few days to allow things to settle down and any opening “first night nerves” to dissipate.

After pausing outside to take some photos, I entered the Public Bar. I was pleased to note that apart from a pastel colour wash to the woodwork, little had changed. The red and black chequered, quarry-tiled floor was still there, as was the wood-burning stove in the fireplace. The original bank of three hand-pumps was also still in place on the bar, and as mentioned above there was a Larkin’s beer (Traditional), plus a Westerham ale (Spirit of Kent), on sale. In addition, the ubiquitous, must-stock beer, Harvey’s Sussex Best was on the third pump. For those who enjoy a nice cool mug of traditional Czech lager, there is a Pilsner Urquell fount on the bar.

There were a couple of middle-aged bikers sitting by the window, plus a friendly chap sitting at the bar. I ordered myself a pint of Traditional, and was pleasantly surprised to find it priced at a perfectly reasonable £3.60. It was in good form as well; NBSS 3.5. 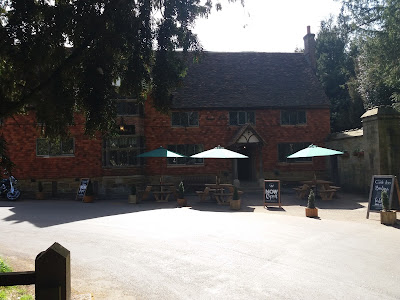 The staff behind the bar were friendly and welcoming, and although the barmaid admitted she was still a novice, she still managed to pull me a decent pint. “Chatty man”, sitting at the bar, was a little too ready to try and engage me in politics, but I managed to fend of most of his questions and allowed him to do the talking. I wheedled it out of him that he wasn’t a local, so it will be safe to return for quiet pint another time!

I took some photos of the interior as well, including a couple of the dining room, just across the corridor from the bar. I had never seen this room open before, although I have a suspicion it was once used as an office.

I only stayed for the one pint, as not only was I driving, I also had to get back to work. I was pleased with what I saw of the revamped Castle, and even more pleased that it has at last reopened, after such a lengthy period of closure. I will definitely be returning, and I can strongly recommend a visit if you are ever in the area.

That's good news Paul-The Castle and The Rock pull us over to this part of Kent-midway to the inlaws in Surrey!

The Rock is also looking good in the hands of its new owners, David. I must try and get back over there myself.