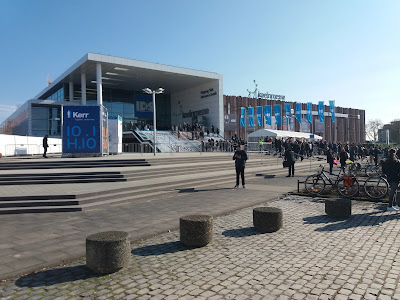 To all those who think that a week away helping to staff your company’s stand at a trade fair, is a bit of a jolly, please think again. I’m not after sympathy, because I thoroughly enjoyed the last five days in Cologne, but it was hard work and, for those of us not used to standing for long periods, gruelling on the feet.

The International Dental Show (IDS), is the largest event in the world which is dedicated to dentistry. It takes place every two years, and the last show (2015), attracted over 138,000 visitors. I would imagine there were even more people attending this year’s show, but the official figures are yet to be released. 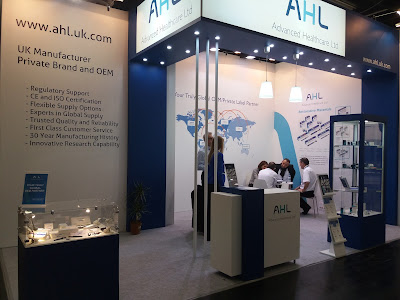 The show takes place at Köln Messe; a large complex of inter-linked exhibition halls, on the eastern bank of the River Rhine. My four colleagues and I stayed at a family-run hotel which is just five minutes walk from Cologne’s main station. Our company has used this particular hotel for the past four shows, so the owners know us pretty well, and we have a good relationship with them.

We chose the hotel originally, for its convenient location, and the fact that a brisk 30 minute walk, past the station and across the Rhine via the footway which runs parallel to the railway over the river (Hohenzollernbrücke), sees us at Köln Messe, and at our stand in the largest of the six halls used for the exhibition. Of course, it is the same route march back, and after a nine hour day spent on one’s feet, that is the last thing most people  want. 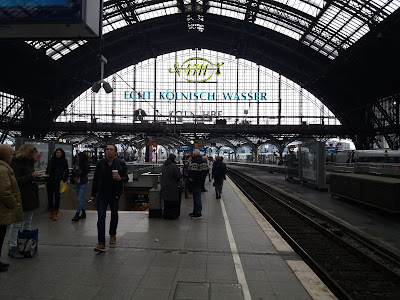 There is actually an alternative, because the IDS Exhibitors Pass  allows free travel on the Cologne Public Transport Network to the exhibition, but I was the only member of our party to take advantage of this. I normally enjoy a walk, and virtually every lunchtime you will find me out taking the air, whilst strolling through the lovely Kent countryside, but last week in Cologne  I made the fatal flaw of  wearing a new, smart pair of shoes that I’d bought especially for the show, but which hadn’t been broken in.

Ouch! I soon had two painful blisters; one on each heel, just below my Achilles’. Serves me right in a way, but hey-ho that’s enough about me. The point I am trying to make was there was very little free time in which to explore and enjoy all that Cologne has to offer. Apart from Monday, when we arrived in the city, the rest of the evenings were spent either entertaining customers, being entertained at a big party hosted by our parent company, or doing our bit for the UK by attending an event hosted by the Department of Overseas Trade. 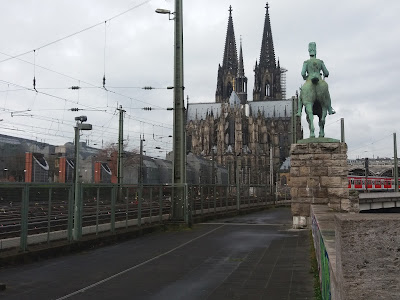 There was plenty of Kölsch available at these events, but my previously stated desire to visit Päffgen;  in my opinion, Cologne’s best Kölsch outlet, didn’t even make it off the starting grid. The only traditional pub-cum-brew-house outlet we visited was Früh am Dom; a deceptively large brew-house within sight of Cologne’s vast and impressive cathedral, or Dom. Our original choice of Gaffel am Dom; another similar outlet, closer to the station, was packed out. As one of my colleagues pointed out, there was a football “friendly” between Germany and England that night, but with the somewhat predictable score, I am not sure that was the reason for Gaffel’s popularity.

Instead it was the sheer volumes of people from the Dental Show who were in town that evening in search of some Teutonic hospitality, which was the real reason why we were unable to get a table. We were beginning to think the same thing about  Früh, as we descended further and further into the bowels of this well-know brew-house, when all of a sudden we spied a able large enough for the five of us, and made a grab for it. 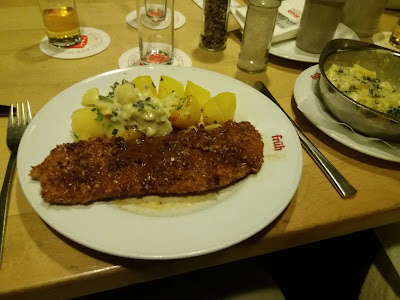 I have my Polish colleague to thank for her decision to go for the full-on German experience that night, after the boss allowed her to choose the type of food we should go for. On the previous two evenings we had visited an Argentinean steakhouse and an Italian restaurant, and whilst they were both very good, it seemed a shame to be in Cologne without sampling a little of the local culture and cuisine.

I had been to Früh am Dom on a previous visit to the city, but only for a few quick glasses of Kölsch, so it was good to be sitting at a table, at the far end of the bottom-most beer cellar, enjoying a few glasses of the excellent beer which is still brewed on the premises. Now I’m sure most people know Kölsch is served in small, plain cylindrical glasses, which typically hold just 20 cl of beer; although some outlets will use 30 cl versions. There is a reason for this, as my colleague discovered when she told the waiter she would make her third glass last. 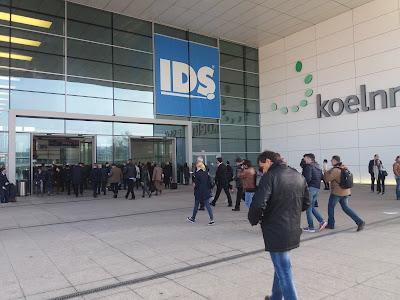 The waiter told her, quite firmly, that Kölsch is a beer designed to be drunk fresh. Leaving a newly poured glass standing for any length of time allows the beer’s condition to dissipate is not conducive to enjoying it at its best; hence the small  glasses. I’m not sure my colleague appreciated this, as she later switched to wine, but the rest of us did. To ensure customers have a fresh glass of beer for as long as they wish to continue drinking, the waiters, who appear to always be male, carry round a circular tray known as a Kranz, which has inserts designed to accommodate up to a dozen glasses, or Stangen.

Kölsch waiters are known as Köbes (a word derived from “Jakobus”), and wear distinctive blue aprons. They have a reputation for being a bit gruff, but our waiter was the total opposite and couldn’t have been more helpful, or more friendly. Food-wise several of us opted for a Mälzerschnitzel; basically a pork escalope coated in breadcrumbs. According to my Polish colleague, Schnitzels are popular in Poland as well, which may partially explain her choice of restaurant. There was an accompanying dish of  Savoy cabbage in cream, mixed with boiled potatoes, which went really well with the meat. 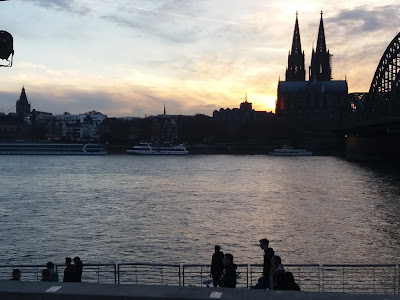 We had around five glasses each of Kölsch, which  equates to a litre. At €1.80 a glass it works out quite expensive, and makes the €7.80 we paid for a litre of beer in the Hofbräuhaus, on our recent trip to Munich, look quite reasonable.

So that was it really so far as a night in an authentic Cologne pub was concerned. I did get to sink a few glasses of Gaffel Kölsch in our hotel and the two other restaurants we ate at, along with Sion Kölsch which seemed to be the default brand at Köln Messe. As I said in my previous post, I will be returning for a fleeting visit to the city in May, as part of a group trip to Düsseldorf. We have a tour booked of the Sünner Brewery, who are independently owned.

So despite appearances to the contrary, our trip was definitely not a jolly, but was nevertheless an enjoyable experience. In summary, I can highly recommend a visit to Cologne; as long as you pick a time when there are no large exhibitions taking place.
Posted by Paul Bailey at 20:17

When going to any big German city I always check when exhibitions are on. Much cheaper when they aren't hotel wise.

A wise move, TM. I found this out to my cost last June, when I was looking at taking a small party over to Nuremberg, for the Franconian Beer Festival. I’d been the year before, and hotel rates in the city were fairly reasonable. I couldn’t understand why they were double what I’d paid in 2015, until I discovered a “Pet’s Fair” is held at the Nuremberg fair ground, every other June. The trip, of course, had to be postponed

Any chance you could name the family run hotel you used (and presumably like)? Hope to be off there at the end of Sept/start of Oct. Thanks.

Hi Eddie, sorry for the late reply. The hotel we use is called Apartel am Dom. Its address is Allerheiligenstr. 2, 50668 Köln. http://www.appartelamdom.de/Home.

I certainly like the hotel, especially as it's only 5 minutes walk from the main station. I'm not sure what the room rates are, but like most of Cologne they're pretty steep when a trade Fair is taking place.