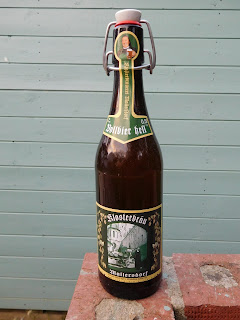 I finally got round to opening one of the beers I brought back with me from my visit to Klosterbräuerei Mallersdorf.  I picked up a couple of bottles of this “Holy Beer” when I made a personal visit to the abbey, back in September. I sampled the beer, on draught, in the small beer garden of the pub opposite the abbey entrance, but I wanted to compare the bottled version to the draught. I noticed that the old-style nicks on the bottom of the label were showing a Best before Date of November 2016, so I thought it prudent to open one.

The beer was packaged in a heavy old-fashioned swing-top bottle, made out of thick, dark-brown glass. I would imagine these bottles are very much “multi-trip”, appropriately designed to withstand the rigours of many re-fills and subsequent washings. A paper “security” closure across the metal “flip top” mechanism has a photo of the smiling Brewster at Kloster Mallersdorf, the legendary Sister Doris. She is shown, dressed in her nun’s robes, holding a foaming glass of the beer she brews for the abbey’s 500 or so inhabitants. I think I’d be smiling too if I had her job! 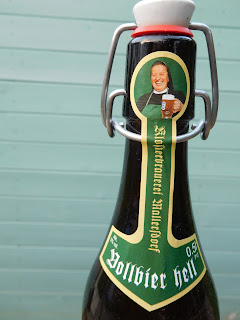 The full name of this 5.0% beer is Klosterbräu Mallersdorf Vollbier Hell. It’s ironic that a beer brewed by nuns should be called “Hell”, but as many of us know Hell means light or pale in German. Like the draught I enjoyed on that hot, late-September day, the bottled version had a slight haze. This was despite me carefully storing the bottles in an upright position for several weeks, and then pouring the beer carefully. It was very pale in colour, with little discernable aroma, and no head when poured. It was clean-tasting and refreshing, although I detected a slight lactic sourness lurking in the background.

This may be because the beer was approaching the end of its shelf-life (see above). I also very much doubt that it was pasteurised. Despite the hint of sourness, the beer was good to drink, and brought back pleasant memories of my excursion into the Bavarian countryside and of the simple pleasures of enjoying good beer in rustic surroundings. 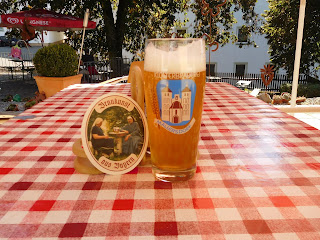 If I lived within easy travelling distance of the abbey, I would certainly be making regular trips to pick up a crate or two of this simple, country beer. I imagine the Holy Sisters also enjoy a glass of this refreshing beer after their labours, and look forward to the stronger versions produced for Christmas and Lent.