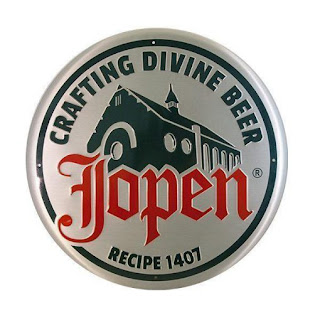 One of the excursions at this year’s European Beer Bloggers Conference in Amsterdam, was a trip to the neighbouring city of Haarlem. On what became an increasingly wet evening we were picked up from the conference hotel in a couple of vintage buses.  I would estimate their era as the 1960’s, but as I am no bus geek, I may well be wrong. From what I recall they were made by DAF, if that means anything, and for those of a certain age, a ride in these classic old buses brought back some pleasant memories

The purpose of our trip was a visit Jopen, Haarlem’s major brewery, which was founded in 1992. Jopen beer owes its existence to a group called "Stichting Haarlems Biergenootschap", whose aim is to re-create traditional Haarlem beers and then bring them to a wider audience by marketing them commercially. Two old recipes were found in the Haarlem city archives, and these were used as a foundation for the company’s first two beers. 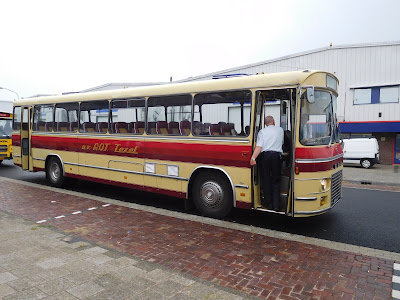 The beers were initially brewed in the Halve Maan Brewery in Hulst, but then in December 1996 Jopen BV acquired the beers and put the company on a much sounder footing. The name "Jopen", incidentally, refers to the 112 litre beer barrels that were used in early times to store and transport beer in Haarlem.

The new owners switched brewing to the La Trappe Brewery in Berkel-Enschot, continuing very much in the vein of a “gypsy” brewery, relying on other companies to brew its beers. In 2001 brewing of the Jopen brands was transferred to the Van Steenberge Brewery in Ertvelde, Belgium. 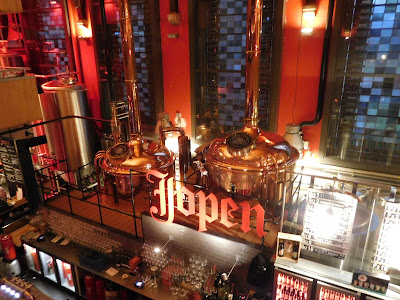 Then, at the end of 2005, it was announced that the Jacobskerk, a redundant old church in the Raaks area of Haarlem, would be transformed into a brewery. On November 11, 2010, the "Jopenkerk" (Jopen church) opened its doors for the public, who must have been amazed at the transformation of this former church into a fully-operational, modern brewery. Here, visitors can sample the entire range of Jopen beers within full view of the brewing system.

The modern brewing unit forms the heart of the Jopenkerk, and was built and installed by BrauKon  from Germany. It has a 2 x 20 hectolitre brewing capacity. Depending on the type of beer being brewed, 12 to 20 hectolitres are brewed per batch. Two large gleaming copper brewing kettles stand behind the bar, alongside eight large lagering tanks. The Jopenkerk though, is not just a brewery, as there is also a café and restaurant on site. A separate room, called the Rectory, is used as a venue for meetings, social gatherings and other events. 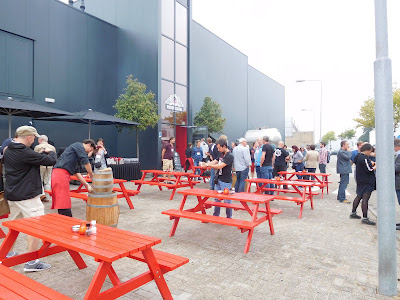 Following fermentation, the beer is transported to the Waarderpolder Industrial Park in Haarlem. Here, the beer is lagered and dispensed into bottles or barrels, by means of an innovative and fully-automated bottling line. This impressive new facility was our first port of call. Unfortunately it had just started raining when we arrived, which was a shame, as the brewery staff had laid out the area in front of the brewery with picnic benches, ready for a barbecue. Fortunately the really heavy rain didn’t arrive until later on in the evening, so we were able to sit out, at least for a while, and enjoy both the beer and the food.

The former consisted of two Jopen beers; North Sea IPA and Koyt, both dispensed from wooden casks. The former is a strong, well-hopped 6.5% ABV IPA, whereas the 8.5% ABV Koyt is an Old Dutch beer style, known as GRUIT. Herbs and spices provide the flavouring, rather than hops. The recipe for Koyt dates from 1407, and is one of the original beers brewed by the Haarlem Biergenootschap, back in 1992. 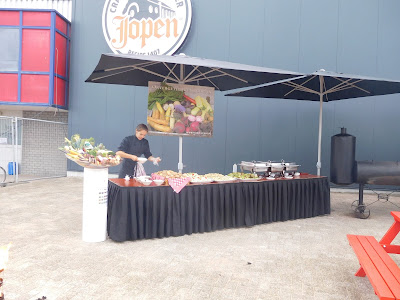 The food was very good and was the perfect accompaniment to the beer. There were barbecued sausages, burgers, satay chicken with peanut sauce, plus ribs, with either pasta or potato salad as accompaniment, so it was rather unfortunate that the before we had properly finished, the rain came on much heavier and drove us all inside.

The Waarderpolder unit now houses it own brewery, as well as all the maturation and packaging equipment, but it is unclear from Jopen’s website as to which beers are brewed at which site. Of rather more interest to us beer enthusiasts was the well-stocked taproom, housed on the first floor. Here we were given free reign to pour our own beer from a selection of 13 taps. Not all the beers were Jopen brands, but a sizeable majority were. Unfortunately I have mislaid the notes I took at the time, so am unable to recount which beers I sampled. 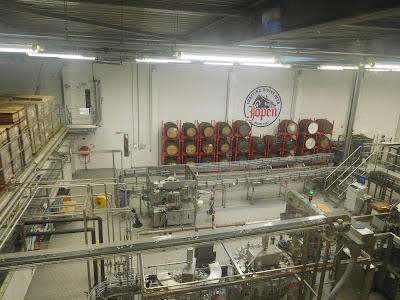 It was back on the buses for the second part of the evening, which saw us driving the short distance into central Haarlem and then making a dash through the pouring rain to the Jopenkerk. Once inside we were ushered to the upstairs gallery, where a row of tables had been set out for us. Having enjoyed our main course at Waarderpolder, we were to be treated with dessert in the form of chocolate cake, crème brûlée and cheese. There were beers specially chosen to accompany each dish; all strong and dark, and I have to say that in the main these pairings worked well.

Again, the notes I carefully took at the time appear to have vanished, but I noticed a beer called Harlem (spelt the American way) Shake in a couple of the photos I took. Confusingly, the beer is not listed on the brewery website, although a strong, 9.0% ABV Double Bock called Johannieter is shown. This was probably one of the other beers alongside the 5.5% ABV Extra Stout. 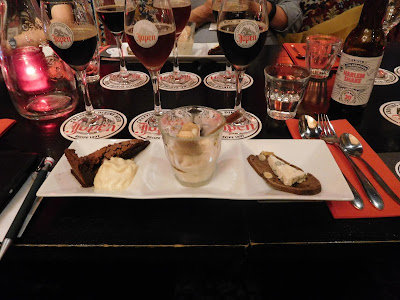 After thanking our generous hosts, we traipsed out through the heavy rain, which was still falling, to the awaiting buses. One bus was allocated to take people straight back to the conference hotel, whilst the other would be dropping people off in central Amsterdam for a mini-pub crawl. I opted for the former, as I had no desire to be walking around in the pouring rain. Besides, I’d had more than enough beer for one day and was ready for me bed.

If you visit the Netherlands, and in particular the Amsterdam-Haarlem area, I’m sure you will come across Jopen beers. Do give them a try, and with such an extensive range there is bound to be a beer suitable for every taste.

Harlem Shake was a collaboration with Amsterdam's Oedipus Brewing:
https://untappd.com/b/jopen-harlem-shake/1326258

And gods, but there was a lot of rain that night!!

Thanks for clarifying that Bryan. It was an excellent evening, and yes the rain that night was definitely of biblical proportions.

One of the other dessert beers was another collaboration, HIJSM Spoor 2 3/4 (Platform 2 3/4), named in honour of the first rail company in the Netherlands.

I can't remember the third!