No Food at the Inn


After an excellent pub meal, on Saturday night, at the King’s Head in Laxfield, Suffolk, my son and I were to be disappointed the following evening. We were staying at my father’s former bungalow in the Norfolk village of Swanton Morley, and had spent the day sorting through piles of possessions which my parents had accumulated over the course of several decades.

It was never going to be an easy task, and at times we had to be quite ruthless in deciding what to keep and what to dispose of. By late afternoon, we’d had enough for the day. My sister and her two daughters, who had been helping us, also felt the same, and they departed in search of something to eat. Matt and I drove over to the care home to spend some time with dad, and by the time we left, we too were feeling famished. 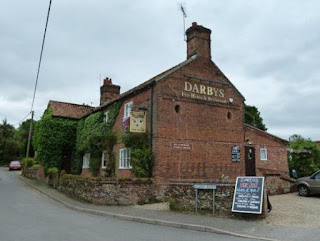 I knew that the Angel in Swanton Morley does not serve food on Sunday evenings, so instead we decided to head down to Darby’s; the pub at the other end of the village. We sensibly left the car at the bungalow, so I could enjoy a few bevies, and set off down the road on the half-hour walk to Darby’s. I was feeling rather tired after the day’s exertions, so was glad when we reached the pub. I ordered us both a beer and then asked about food. “Sorry”, the barmaid replied, “we’re fully booked.” Well you could have knocked me down with a feather as, apart from two chaps sat at one of  the tables enjoying a meal, plus a group of three lads sat drinking at the bar, there was no-one else in the place.

The time was just after 7.15pm, so I asked surely you can squeeze a couple of hungry customers in. “No, sorry”, was the reply, and with no further word of explanation the girl behind the counter walked off. Cursing for not enquiring about the food before getting the drinks in, we went and sat at one of many vacant tables. I did spot a couple of reserved signs, but they were presumably for later on. Not long afterwards, a family with two children came in. They asked about food, only to be told the same thing; the pub was fully booked. Unlike us, they had not ordered drinks, so did a swift about turn.

We sat and finished our pints, dismayed at the prospect of a walk back in order to pick up the car, so we could drive elsewhere in search of something to eat. Apart from the aforementioned family, on-one else came into the pub; in fact the three lads sitting at the bar left. We too departed, shortly before 8pm. 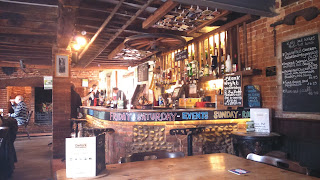 Matthew thought I was a bit rude by only grunting a half-hearted response to the barmaids farewell “goodnight”, but in truth I was well cheesed off. Now the pub may have had good reason for not serving casual customers on a Bank Holiday Sunday, but from what we saw I very much doubt they were fully booked. I was left wondering as to why people enter the hospitality business when they don’t know the first thing about looking after customers, or how to run a business, for that matter.

The strange thing is I have eaten at Darby’s on several occasions; in fact the last time was in February when the pub was far busier than it was last Sunday. Then, the staff had gone out of their way to squeeze me in at a small table in the restaurant area at the far end of the pub. It would not have taken the kitchen long, last weekend, to have rustled us up a couple of burgers and chips. Not only would they have taken payment for the food, but we would also have stayed for several more rounds of drinks. The same would have been true for the family who were turned away.

I am left wondering as to whether the pub might have changed hands, but there is no evidence to support this idea on either the pub website or CAMRA’s WhatPub. Perhaps we caught the place on a bad day, but it’s not really what one expects on a Bank Holiday Weekend, when there are bound to be more people out and about than usual; some of whom might possibly be looking for something to eat.

Obviously it is up to the people running the business as to whom and what they serve, but you can imagine the same owners bemoaning the fact that trade is slack and no-one uses the pub. The answer is obvious, but until business owners wake up and smell the coffee, and up their game, pubs across the country will continue to lose custom and eventually close. 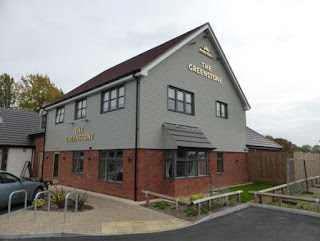 Footnote: Matt and I walked back to the bungalow, picked up the car and drove into Dereham. We went to a recently built Marston’s pub, called the Greenstone, on the edge of town. The place was heaving, but the staff found us a table, and not long after we were tucking into a fine chicken tikka masala. It wasn’t gourmet food, but it was served piping hot, was well presented and good value for money.


I didn’t have a beer with my meal, as I’d had one earlier and was driving, but the Marston’s beer range looked perfectly acceptable. The following day my sister, who lives locally, told us we were lucky to have got a table, as the pub is usually full. Now contrast that with the first pub we went in that evening, and ask yourselves why?
Posted by Paul Bailey at 21:54

You might have expected it the other way round i.e. the chain pub being inflexible. It's a shame the Angel couldn't have at least offered you chips and a sandwich at the bar, as you mentioned. Restaurants will often ask if you can finish by a certain time.

It was Darby’s where we had the problem, Martin. We knew the Angel doesn’t serve food on Sunday evenings, which is fair enough, but Darby’s website advertises the fact they have seating for up to 50 people. Unless they were expecting a coach load later on, I think they were being a bit economical with the truth.

We called in at the Angel on Bank Holiday Monday evening. We had eaten earlier at my sisters, so were just after a few beers. The Summer Lightning was disappointing; especially after my last visit, when it was excellent. I wasn’t the only customer who thought so, as the chap at the table opposite us took his back. Stale, rather than off, would be the best way of describing it (NBSS 1.5). The Woodforde’s Wherry, on the other hand was excellent, coming in at 4 on the NBSS. It’s just a shame Wherry isn’t a beer I am particularly fond of.

If an empty pub is fully booked, then it has crossed a line and become a restaurant.

Paul - it's good to be able to distinguish between a beer you're not keen on and good cellarmanship. Wherry is an odd one. I used to like it a lot at pubs close to the brewery (Winterton stand out); it had a similar reputation to Landlord for a while. I haven't had a really good pint for many years now, just very dull examples in pubs that clearly major on food. Must give the Angel another go.