This weekend’s SIBA South East Beer Festival, held at Tonbridge Juddians Rugby Club, was the best to date. This annual event seems to get better each year and apart from the 2012 event, which had to be cancelled due to some rather un-seasonal flooding, the festival has gone from strength to strength. It is therefore no exaggeration to say that the event has now become one of the highlights in the Tonbridge’s social calendar.

This year’s event was the 9th, and the 7th which the rugby club have hosted; the first two having taken place at the former Whitbread Hop Farm near Paddock Wood, although this attraction is now known as the Hop Farm Country Park. Before the festival throws its doors open to the public, some serious judging of the various beers takes place. A glance at the SIBA website shows the numerous categories, but whilst the results obviously matter to the brewers concerned, they make little difference to me, in exactly the same way as the GBBF results don’t either. If you are at all interested in which beers won which awards, then click on th link above.

My lack of interest in the competition results does not mean there weren’t some cracking beers available; and I will highlight some of them later For me, the best aspect was the family nature of the festival, with the club’s large marquee opening out onto a couple of the pitches, giving plenty of room for people to sit out and soak up the sun, along with the beer. An extended family group, which included my wife and I, my wife’s two nieces and their respective partners, plus a few friends, visited on Saturday afternoon, and we all brought various items of food to enjoy with the beer.

It was one of those quintessentially English summer days, made all the better by our cricket team beating the Aussies in the first test. There was even a vintage 1940’s aircraft which flew low, doing several circuits over the Sportsground, which got everyone’s attention and added to the atmosphere. Not being a plane buff, I am unable to categorically say whether the aircraft was a Spitfire or a Hurricane, but given the profile of its wings, my money’s on the latter! However, its presence certainly sparked a lot of debate amongst all who saw it. 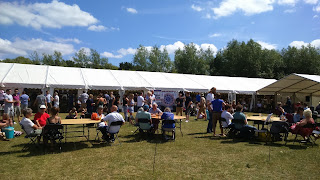 There were around 170 cask beers on sale, all priced at £3.20 a pint; paid for by means of tokens. All the beers were entries in the SIBA South East Competition, and were sourced from brewers in the counties of Berkshire, East Sussex, Hampshire, Isle of Wight, Kent, London, Surrey and West Sussex which, together, make up the South East Region. My favourites were the two offerings from Burning Sky (Plateau 3.8% & Aurora 5.6%), the three beers from Franklins (English Garden 3.8%, Smoked Porter 5.0% & Citra IPA 5.5 %.), Flack Catcher 4.4% from Flack Manor and Knight of the Garter 3.8%, from Windsor & Eton. Also scoring highly were Summer 3.7% and Mosaic Pale 4.1%, from Hammerpot, plus Thirty Three 3.3% from Brighton Bier.

I understand there were a few duds, but fortunately I had been alerted to these by friends and neighbours, the previous evening, so knew which to avoid! Not on sale were the “craft keg” beers, which were there just to take part in the competition (separate category, of course). According to a couple of friends who took part in the judging, the beers were very good, but there were problems with gas-lines and with over-lively beer (fobbing). Logistical problems also meant it was not possible to make these beers available to the public; but who knows what might happen in future years.

The only downside to this festival was the fact my American brother-in-law, who was supposed to be spending a fortnight with us, and who was looking forward to the festival, had to cancel his trip over from the US, due to work commitments. If you’re reading this Ernie, the beer was excellent and we certainly had a few on your behalf!
Posted by Paul Bailey at 21:04

Sounds like fun. The only beer in the list of winners that I've had is the Dark Star Hophead. I haven't even heard of most of the breweries listed, let alone tried them. This is good, as it shows the diversity you now get in different parts of the country.