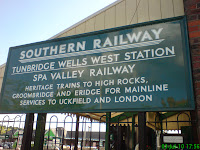 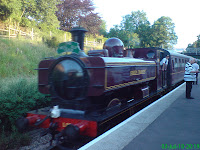 Next weekend sees my local CAMRA branch involved with the running of the Spa Valley Railway Beer and Cider Festival. The festival is a joint venture between the two organisations and combines the often shared enthusiasm that exists between lovers of steam trains and real ale. This will be the second such event for the railway and CAMRA, but the first that I have been involved with. Last year's festival was something of a learning curve, but was nevertheless a great success. We hope to build on what was learnt, so that this year's event is even better.

There  are 44 cask ales on offer. plus 8 traditional ciders. All the beers and the ciders are locally sourced from Kent and East Sussex plus one from Essex and one from Surrey. The majority of the beers will be racked and on sale at Tunbridge Wells West Station - Spa Valley's headquarters, but a small hand full will be available further down the line, at Groombridge and Eridge stations. Beer will also be available on the trains that run between the three stations. The festival runs from 5pm on Friday evening until 6.30pm on Sunday (19th to 21st October). 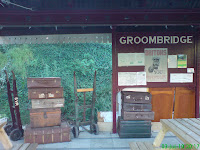 The Spa Valley Railway is a heritage railway, operating both steam and diesel trains that run for 5½ miles through the picturesque Kent and Sussex Weald between the mainline junction at Eridge and the spa town of Royal Tunbridge Wells, stopping off in between at Groombridge and High Rocks. 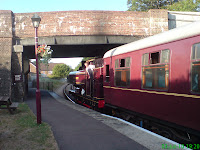 The railway is easy to reach by public transport. Tunbridge Wells West is a short walk, via the town's famous Pantiles area, down from Tunbridge Wells mainline station. Alternatively, visitors can travel on Southern services from London Bridge, or East Croydon to Eridge, on the Uckfield line. Once at the railway, visitors can buy a £10 ticket that will allow them to travel back and forth between Tunbridge Wells and Eridge all day. Alternatively, return tickets to intermediate stations, such as High Rock and Groombridge can also be purchased.  Saturday will see trains hauled by heritage diesel units, whilst Sunday sees steam haulage


Food, in the form of  lasagne, chili con carne, curry, will be available at Groombridge station with a barbecue at Tunbridge Wells West. In addition, sandwiches, snacks and other refreshments will be available on the train and at stations along the line.

For more information regarding the beer festival, plus the full beer list click on the link here. For an account of the branch's previous trip on the Spa Valley Railway, plus a short history of the line, click here.
Posted by Paul Bailey at 19:52

Learning how to create wort, choosing the hops and adding the yeast are confusing tasks at first, just like any recipe. Brewing beer at home is no different from the process of perfecting a time-honored recipe.