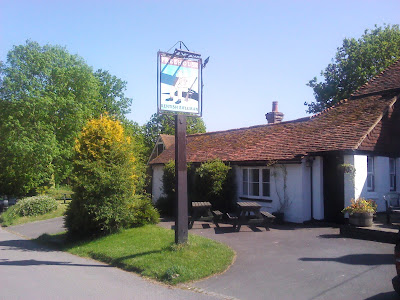 Friday,  like both yesterday and today, was a gloriously hot and sunny day, with not a cloud in the sky. It was the ideal day for a walk in the picturesque Kent countryside, taking in a pub stop, or two, along the way.  I've got some leave to use up, so had booked the day off work and couldn't have been more fortuitous in my choice.

I had been in contact with my friend Don who, like myself, is a keen walker, and we had decided to visit the Kentish Rifleman in the tiny hamlet of  Dunk's Green, situated between Plaxtol and West Peckham. Although Don is quite familiar with this pub, it is getting on for twenty years since my last visit, so a return there was long overdue. 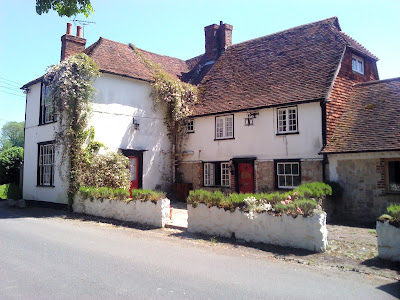 We caught the bus as far as Hadlow, alighting at the far end of the village, and then followed a series of footpaths that led us slowly up towards the Greensand Ridge. We stopped on a suitably sited seat, amongst a field of cows, to eat our sandwiches and take in the view. Although conditions were slightly hazy, we could see back towards Tonbridge and across to Castle Hill on the horizon. We then turned due west, skirting the Victorian pile of Oxen Hoath House before coming across the sadly closed Artichoke pub at Hamptons. Now converted into private dwellings,  I couldn't help reflect on the loss of this fine old attractive inn. I'm not quite certain of the reasons for the pub's closure, (property prices probably) and can't remember quite when it took place, but I remember being surprised when I heard the news, as it always seemed a really popular venue. 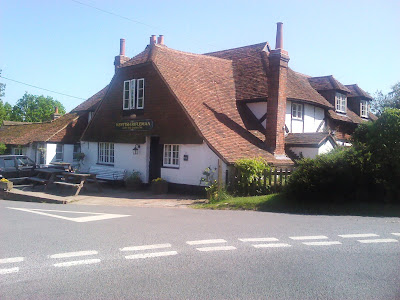 Crossing the lane in front of  the Artichoke, we continued through cornfields, along the Greensand Way,  in a roughly north-westerly direction, eventually arriving at our destination around 1.30 pm. It wasn't a long walk, by any stretch of the imagination, but with temperatures in the mid to high twenties it was probably far enough. From the outside the pub looked little changed from how I remembered it 20 odd years ago, and indeed stepping inside not much seemed to have altered either. This, whilst welcoming, was slightly surprising as I knew the pub had suffered a serous fire back in 2007 that had caused substantial damage to this early 16th Century building. 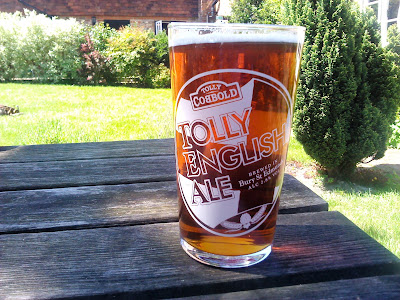 There are still effectively two bars, with the more comfortably furnished "saloon" to the rear of the pub. After ordering our beer we walked through the latter and out into the very pleasant and secluded garden. Finding a suitably shady spot we sat down to enjoy our beer - Tolly Cobbold English Ale, sold at  £2.75 a pint. I have to say that despite its low strength of just 2.8% abv  I really enjoyed this beer. On a hot summer's day it was just what the doctor ordered, and ticked all the right boxes so far as I was concerned. The beer certainly had plenty of flavour, and was so enjoyable that we both decided to go for a second pint as well! Other beers on sale at the Rifleman  were Harvey's Best (it gets everywhere, but is still a cracking pint!), and Native, a 3.7% abv offering from Whitstable Brewery. 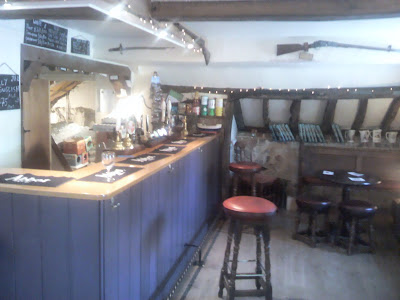 I wouldn't say the pub was packed, but there was a steady flow of customers, most of who were taking advantage, like ourselves, of the opportunity of some al fresco eating and drinking. We left the pub just after 3pm, when it closed for the afternoon break (not a lot of point of being  open all day around here). We headed back towards Hadlow, following a slightly different route through the delightful, and virtually hidden, Bourne Valley. What was noticeable about both the outward and return journeys, was the fact we never saw another soul on either walk, which was puzzling on such a lovely day. Perhaps it shows that even here in the over-crowded South East it is still sometimes possible to escape the crowds. 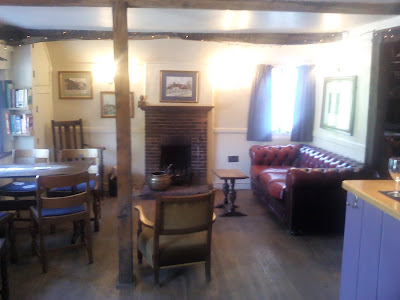 We arrived back in Hadlow shortly before five o'clock, which left time for a quick pint in the Two Brewers, one of the four pubs that now remain in the village, and one that is easily the best. The fact that the Two Brewers belongs to Harveys of Lewes is the first thing in its favour, the second being it is still a proper village local.with two bars and a variety of traditional pub games. Its biggest plus though is the quality of its beer, with Cask Marque accreditation and Good Beer Guide status reflecting this. We were spoilt for choice with Harvey's Dark Mild, Knots of May Light Mild, Hadlow Pale, Olympia and Armada on sale alongside the Best Bitter. Don opted for the 3.0% Knots of May, whilst I went for the 3.5%  Hadlow Pale. Both, I'm happy to report, were in tip-top condition.

We could have stayed for another, but as both of us had a lot of things to do come the weekend we reluctantly left the pub, wandered down to the main square and caught the bus back to Tonbridge. It had been a most enjoyable day out that was made all the more so by the glorious weather, the attractive scenery and two excellent, but very different, pubs, both of which appear to be doing well and bucking the national trend!
Posted by Paul Bailey at 22:44

It must be said you do still seem to have some excellent "proper" country pubs in your neck of the woods.

Just itching to be there when I read your stuff.

Curmudgeon, we do still have some "proper" country pubs around these parts, but unfortunately they are becoming increasingly rare. As well as the sadly closed Artichoke, mentioned in the post, on the way into Hadlow we passed what was once a really unspoilt, traditional old pub known, until recently, as the Rose Revived. Alas the Rose is no more, and the pub is now an Indian restaurant called Spice Lounge; a fate that has befallen several other pubs in the area!

Tandleman, you are more than welcome to pay us a visit, in fact I would be delighted to introduce you to some of our lovely old pubs. Just be prepared for beer served the proper way ie. with a small loose head, rather than a tight thick creamy one!