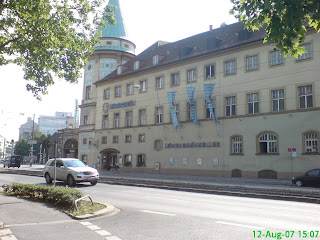 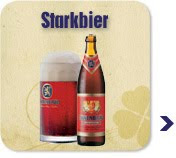 Last night I drank the last of the beers that I'd brought back from Munich. I seem to have cracked the art of packing them in my suitcase so that they survive the rigours of being crammed into the baggage hold on the flight home. However, as weight is another consideration apart from the risk of breakages, I usually limit my purchases to around half a dozen bottles.

I'd saved the strongest beer to last. It was Triumphator Dunkler Doppelbock from Loewenbraeu. At 7.6% this beer doesn't take many prisoners. Doppelbocks are dark, strong beers that were originally brewed by monks to see themselves through Lent. Being strong and sustaining, these potent brews are literally "liquid bread". Although Doppelbocks may be available in bottled form all year round, they typically make an appearance on draught for a limited two week period starting around the middle of March. This period is known as the Starkbierzeit (strong beer time), and is celebrated by most of Munich's beer halls. The parties put on by the Paulaner and Loewenbraeu Kellers are said to be particularly noteworthy, and copious amounts of these potent beers are consumed. Despite their strength, they are sold by the litre! Starkbierzeit is sometimes referred to as the "5th Season", and is the time of year just before spring when the indoor beer halls are about to give way to the opening of the city's many beer gardens, and the celebrations move outside until late autumn.

The original and Grand-daddy of the Doppelbocks is Paulaner's Salvator, and in acknowledgement to this fact virtually all other breweries that produce these potent beers add the suffix "ator" to the chosen name of their brew. Thus starting at the beginning of the alphabet, we have Aviator, whilst at the end we have Unimator with just about everything else in between. (Celebrator, Kulminator, Maximator, Operator,Spekulator - to name but a few!)

To return to the beer in question; it was absolutely superb beer that totally belied its big-brewery origins. I have drank Salvator many times now, including on our recent trip, and have been somewhat disappointed, particularly of late, thinking it was missing something. This was not the case with Triumphator; it was an absolutely brilliant beer that knocked spots off its cross-town rival. From first pouring it you could smell the toffee like malt of this rich dark beer, and when first tasted it had the most unbelievable chewy maltiness imaginable, balanced by just the right amount of bitterness. My only regret now is that I did not bring back a suitcase full of this marvellous beer!
Posted by Paul Bailey at 21:33