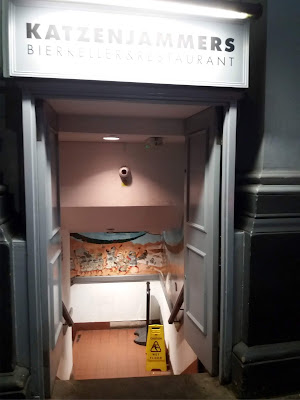 I mentioned in my recent post about London, that after finishing our drinks at Holborn’s Princess Louise without so much as a drop of Sam Smith’s Yorkshire Stingo to be seen, son Matthew and I were feeling rather famished. I at least had eaten a couple of slices of toast at breakfast time, but given Matthew’s tardiness in dragging himself out of bed, the only solid food that had passed his lips was a couple of packets of crisps.

I’d screwed up, thanks to the perils of performing a Google search on a small screen. I mis-read the information on the pub's website and  was convinced that the establishment named after Queen Victoria’s rebellious and rather feisty fourth daughter, served food on Sundays. The fact that it didn’t was the first disappointment, the second being no Yorkshire Stingo, despite the pump-clip still being in place.

A packet of Sam’s “own brand” crisps, whilst good, did little to assuage the hunger pangs which by now (6pm), were beginning to affect us both. We sat there racking our brains, trying to think of a pub where we could get something to eat. Apart from Wetherspoon’s we couldn’t really think of anywhere. Knowing I wasn’t keen to set foot in one of “Hard Brexit-supporter” Tim Martin’s establishments, Matthew suddenly came out with a real brainwave. 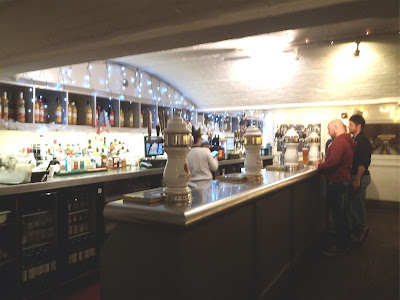 “There’s always Katzenjammers,” he said. Now I’d heard of this Bavarian-themed Bierkeller, close to London Bridge station, and I also knew that Matthew and his friend Will, had been there on several occasions. This was definitely thinking outside of the box, as whilst I tend to restrict my choices to known cask-ale outlets, Matthew was thinking along totally different lines.

When he assured me that we’d be able to get food there, I was sold on the idea, so after a quick journey on the Central Line to Bank, and then negotiating the myriad of pedestrian tunnels leading to the Northern Line, we alighted at London Bridge underground. We made our way along Borough High Street, towards the Victorian splendour of the Hop Exchange. 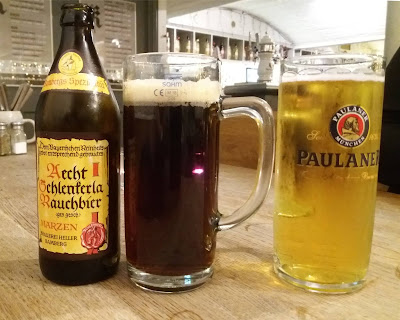 Katzenjammers is situated in the basement of this imposing, but attractive building, and as we descended the steps down into the Bierkeller, I had a distinct feeling of déjà vu. The legendary Becky’s Dive Bar was also situated in a cellar below the Southwark Hop Exchange, but after conducting a spot of research, I discovered it was a few doors down from  Katzenjammers. That strange feeling of familiarity was definitely there though.

The  German word “Katzenjammer” has a number of different, but related meanings, ranging from “an unpleasantly loud, confused, and dissonant sound,” to “the discomfort and illness experienced as the after effects of excessive drinking.” 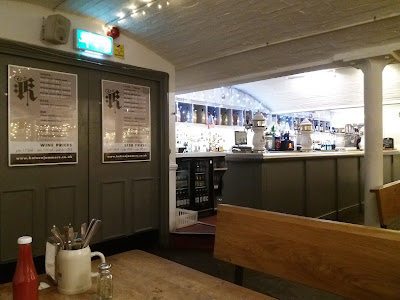 I’ll settle for the last one, although there’s nothing discomforting about this spirited attempt at creating an authentic Bavarian Bierkeller in the heart of London. With its brick-vaulted ceiling, steel-clad bar, wooden benches and scrubbed wooden tables, this was a place I instantly felt at home in. The only thing missing was waitress service, because unlike most German pubs, it is necessary to place one’s order at the bar.

It didn’t take long for us both to decide on Schnitzel mit Pommes for our evening meal, although I admit to being tempted by the roast pork with dumplings (Schweinebraten). There was also a good selection of German beers, including around 10 on draught and double that number in bottled form. The former were available either by the pint, or the litre (Maβ). 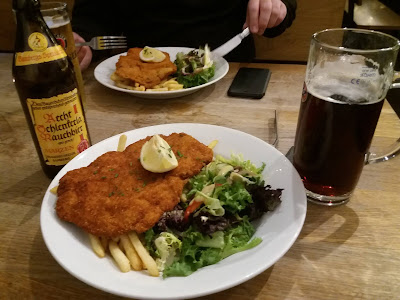 Matthew went  for a pint of Paulaner Original Münchener Hell, whilst I opted for a 500ml bottle of  Schlenkerla Rauchbier;  Bamberg’s legendary smoke beer, and one of the most instantly recognisable, as well as one of the finest, beers in the world. Intensely smoky in both aroma and taste, with more than just a hint of bacon and wood in the main body of the beer, Schlenkerla really is the king of smoke beer and one almost to die for!

Apart from perhaps at the foreign beer bar (Bieres san Frontieres) at GBBF, I don’t ever recall coming across Schlenkerla on sale anywhere in the UK; certainly not on in a bar or a pub. That first mouthful was enough to transport me back to Bamberg and the Aecht Schlenkerla tavern, home of this classic Rauchbier. 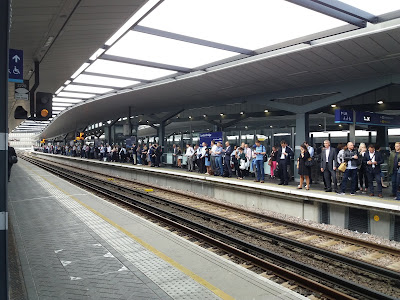 It wasn’t long before our Schnitzels arrived and we got stuck in with the relish and vigour of two hungry men. I am pleased to report they were every bit as good as the Schnitzels we have enjoyed all over Germany and after demolishing them we both sat there with the contented glow of those who have ate and drank their fill.

We discovered there is a larger Bierhall on the next level down. This area with its  barrel vaulted ceiling and industrial design, opened in 2015,  allowing Katzenjammers to  accommodate more customers as well as offering live entertainment and dancing. Being a Sunday, it was closed, but I managed a quick peep inside, when I popped down to visit the gents. 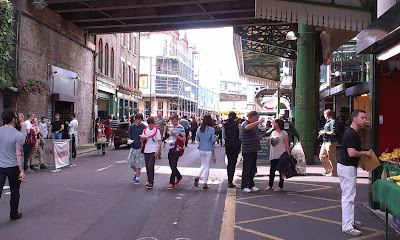 We could perhaps have stayed for another, but with work for us both in the morning, and the fact that time was already marching on, we decided to call it a day. Before bringing this post to an end,  I want to reflect on recent events. As we sat  in Katzenjammers, on that quiet Sunday evening, we touched upon the appalling London Bridge terror attacks of two years previously.

It was Matthew who first raised the matter, as he thought that some of the people fleeing the attackers had sought sanctuary in Katzenjammers. I said that I wasn’t sure, and  after a short while, we kind of left it like that. Little did we think that just five days later, terror would return once again, to London’s oldest and most famous bridge. If such a reminder was needed that you never know what might be round the corner, then that was it, but it is also worth reflecting that such horrific events are fortunately few and far between. 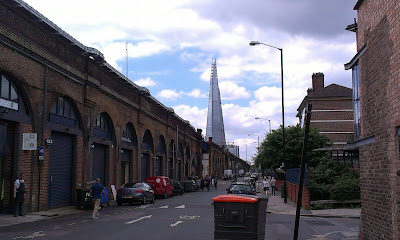 My thoughts go out to the families, friends and loved ones of the two bright young people who, with the whole world ahead of them, tragically lost their lives last Friday in a senseless act of violence. They also go out to the other people caught up and injured, both physically and mentally as things unfolded.

Finally to those brave individuals who, without thinking of their own safety, came to the aid of the injured, as well as cornering and restraining the perpetrator of these evil deeds, you are all in my thoughts as I end this piece.

I'm surprised you've never come across Schlenkerla Rauchbier in the UK - it's common enough in many specialist offies and bars. I can think of two pubs and three shops that sell it on Tyneside just off the top of my head.

I must be drinking in the wrong outlets ElectricPics, as I've never come across Aecht Schlenkerla on sale in the on-trade, here in the UK. I'm surprised that a classic pub like the White Horse, at Parson Green doesn't stock it, and a Google search doesn't throw up anything either.

I normally pick up a few bottles, from Beers of Europe, at Kings Lynn, on trips to Norfolk, but on last year's visit to Bamberg, I brought back as much as I could fit in my suitcase.

You're both right. I see those Schenkerla bottles in a few free houses and craft bars, but mostly up north.

Seen it once on draught, in the Swan in Stratford on Mary in Dedham Vale.

Boutillion (?) of Faversham make a rauchbier I enjoyed in Leicester last week.

I see you're still drinking responsibly! If you ever find yourself up this way, on a beer tour of the north perhaps, you should definitely check out Message in a Bottle, Cleethorpes. They are mainly an off license selling nearly all local ales, and many world beers and ales and have recently started having a pop up bar every weekend. Quite a choice! https://www.miabcleethorpes.net/

Good to hear from you Mark. I trust that the frozen north/Brexit land is treating you well.

There's been a lot going on with regard to the local beer scene since you left Tonbridge, so there are ample opportunities for responsible drinking!

All the best from Sunny Tunny!