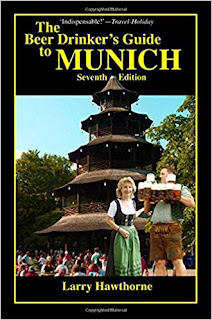 One of the books I reviewed towards the end of last month, was the “Beer Drinker’s Guide to Munich”;  an indispensable guide to the best beer gardens, brew-pubs and beer halls that the Bavarian capital has to offer.

The guide is now in its 7th edition;  the the new/current one having hit the bookstalls in 2015. Having made full use of the previous (2008) version, I was pleased to notice the new edition on sale, so ordered myself a copy for Christmas, especially as the older one had become a little out of date.

I must admit that when I first flicked through the pages of the new edition, I thought it was a little too similar to its 2008 predecessor. However, having had the opportunity to read it through more thoroughly, I realised that despite obvious comparisons with the 6th edition, all previous entries have been revisited and, updated, where necessary. 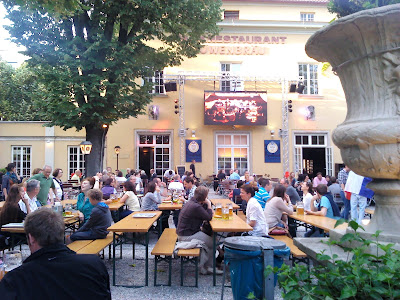 So full marks to guide author Larry Hawthorne and his team, for whom the BDG2M has been a labour of love since the first edition appeared back in 1991. That 6th edition of the guide I referred to earlier, was purchased prior to our 2009 trip to Munich, and we made full use of it on that, and subsequent visits in 2012 and 2014.

If we were planning to visit the Bavarian capital this summer, then the new edition would certainly have come into its own, but given the current uncertainty regarding a certain major “own-goal” scheduled to take place at the end of this month, we haven’t finalised any plans for trips to Europe; despite having several ideas floating around. 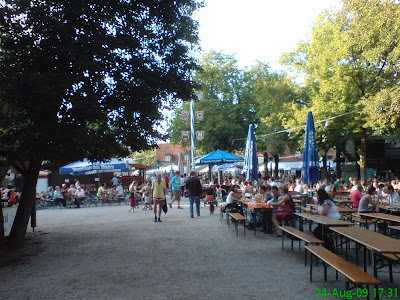 Don't let this stop you though, as if you are thinking of a trip to the Bavarian capital, then the BDG2M comes into its own especially if, like me, you enjoy drinking outdoors, soaking up the beer and the sun in equal measures.

Larry’s guide will certainly direct you to some of the best beer gardens that Munich has to offer, each entry coming with its own set of instructions of how to get there using public transport S-Bahn or U-Bahn lines and Stops, plus bus numbers and where to get off. Also  included are handy, hand-drawn maps wherever there is some walking involved.. The guide gives details on what beer is on sale, the food offering, general ambience and, where appropriate, a bit of history as well. 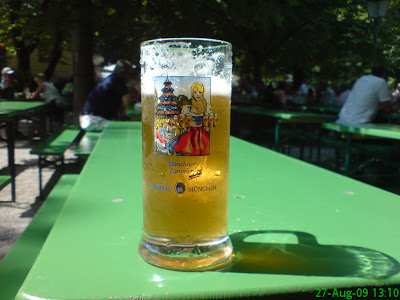 What I particularly like about the guide is, as well as directing the thirsty visitor to some of the city’s larger, and  best known beer gardens, such as Hirschgarten, Munich's largest watering hole, situated in a former royal hunting preserve, and the Chinesischer Turm in the Englischer Garten , the BDG2M also lists  some smashing little, tucked-away beer gardens; places one would hardly know existed, were it not for this well-researched publication

Beer gardens such as Insel Mühle, a delightful, secluded establishment situated on the banks of the fast flowing River Würm, and Zum Flaucher, one of Munich’s oldest beer gardens, tucked away in an area of secluded park and woodland. There are plenty more beer gardens to discover, including several in the aforementioned Englischer Garten – Munich’s equivalent of Hyde Park. 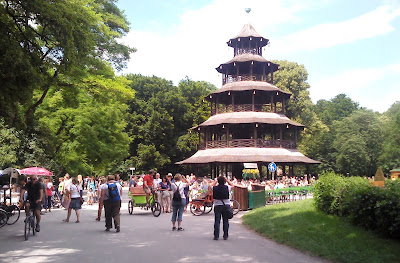 An added bonus with each copy of  the guide is the inclusion, at the back, of a number of  "tear-out" vouchers entitling the bearer to a free litre of beer at selected "Five Beer Mug Rated" establishments. (The guide rates each entry on a three-five "Beer Mug" basis, with seven establishments meeting the top ranking).

The idea behind what is essentially  a "BOGOF" offer, is that when you purchase a beer at the regular price, and present your voucher (along with a copy of the guide, you qualify for a free litre, or half litre, if you've only purchased 500 ml, of beer. 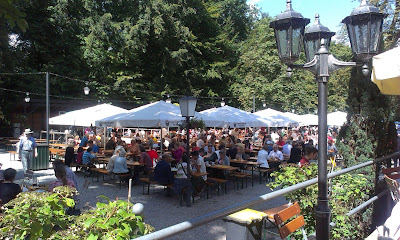 All this talk of beer gardens and  summer sun is leaving me both thirsty and slightly envious of these very civilised places in which to enjoy a beer. I sometimes wonder whether the concept would work over here, but beer gardens are really very dependent on warm and dry weather. I also wonder whether they are suitable for the English temperament.

To summarise, if you’re thinking of a trip to Munich, get yourself a copy and Larry, if I ever bump into you in one of the city’s beer gardens, then I definitely owe you a beer!
Posted by Paul Bailey at 22:24

Always respect someone who can admit to changing their mind, Paul !

Like you, I'm a bit cautious about fixing dates for the year, but a proper trip to Munich is long overdue (though I preferred Nuremberg).

Thanks Martin, there's much to be said about not rushing into a post, but to reflect a bit first, especially if you're not quite sure. Having said that, I did go back and re-edit the initial review, as I did think I was being both harsh and unfair; but that's sometimes the result of hitting the "publish" button too soon.

Nuremberg certainly has a lot more history on display than Munich, plus it's smaller, but rather like London, the Bavarian capital has its own distinct areas - much like our own capital's much vaunted "villages"; and then there's the beer gardens!

I'm still toying with Poland and Norway, but waiting for Mrs PBT's to make her mind up. She fancies Scotland, so I've told her to plan out the route, make the necessary hotel bookings, and I'll do the driving.

I've also got over a hundred pounds worth of Nectar points to convert to either an Easy Jet flight, or a Eurostar trip. I quite fancy the latter, with the Ardennes as our destination, but we will see.

I'm off to Cologne the week after next (also by Eurostar), but that's a business trip. As long as I can sneak away for a visit to Brauhaus Päffgen, I shall be a happy bunny!

Nice Blog, Thank you so much for sharing such an amazing blog. You can also read our blog : Beer mug