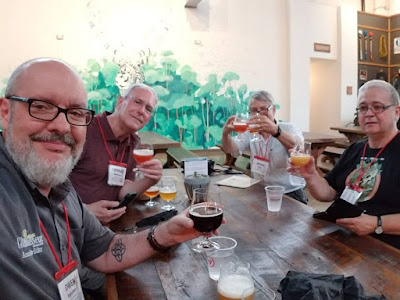 Following our tour of Stone Brewing’s impressive and mega-size brewery, we re-boarded our coach and set off for the area of Richmond, known as, Scott’s Addition. This 152 acre area of land was once a bustling industrial area, but is now the city’s fastest growing neighbourhood. Today it is best known for its impressive collection of breweries, cideries and distilleries. is now home to five breweries—including the most recent, Väsen Brewing. 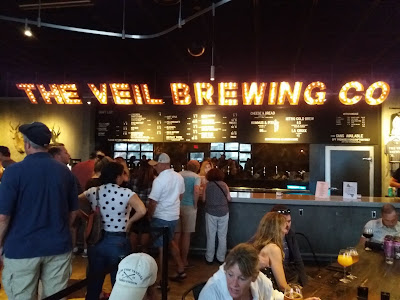 The day was arranged by Visit Richmond VA – the tourist authority responsible for promoting the former Confederate capital to the outside world. The organisation looked after us extremely well, having conveyed us by coach from the conference hotel, close to Washington Dulles Airport, to the Omni Hotel, which would be our overnight  base in Richmond.

Unfortunately the one thing which was outside VRVA’s  control was the weather; although to be fair they were aware of the distinct possibility of thunderstorms on that Sunday afternoon. The plan was our coach would drop us off in the Scott’s Addition neighbourhood at Väsen Brewing Co. There were four other breweries within easy walking distance, plus two more a short taxi ride away. At 6.45pm the coach would pick us up again, outside Väsen in order to transport us to the final venue of the evening. 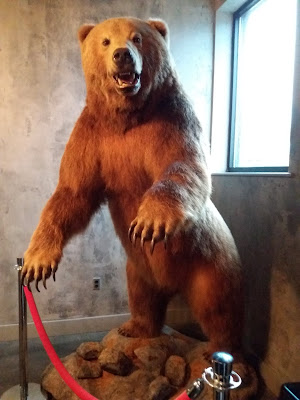 So far, so good, but almost on cue, the first of several thunderstorms hit just as we were getting off the coach. I was with a group who decided that it would be better for us to head for The Veil Brewing Co’s premises first, in order so as not to swamp Väsen with a sudden influx of people. Veil was only a couple of blocks away, but the heavens opened whilst we were on our way and we had to sprint the last couple of hundred yards.

We had been told to wear our conference badges, as these would ensure that any beers we ordered would go on the Richmond Region Tourism tab, but despite the possibility of almost limitless beer, I decided to take things a little easy. The Veil Brewing Co. are a relative newcomer on the Richmond scene, but have quickly established a reputation for brewing some excellent beers. 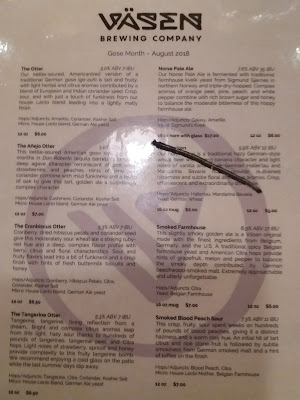 Their taproom is characterised by dark walls and minimalist décor, with a large stuffed and very fierce-looking grizzly bear standing in one corner. The brewery’s tap list is constantly rotating, but the notes I took at the time showed I enjoyed a 6.0% IPA called Catnap, plus a nice and well-hopped 4.5% Pilsner, called Child Support.

Looking out through the window, we noticed the rain coming down as hard as ever, and with no signs of it abating, we were debating what to do next. Fortunately one of the team from Visit Richmond was in the bar with us, and she had the foresight to call the coach and ask the driver to come and collect us.

With this accomplished, we had the choice of a few beers at Väsen or some at nearby Ardent Craft Ales. As it was still raining heavily, most of us opted for Väsen, especially as that would be where the coach would be departing from. Väsen Brewing, are one of the newest breweries in Scott’s Addition. In Swedish, the word väsen is a reference to one’s inner essence, or spirit animal, and the taproom, has a real Scandinavian feel to it. 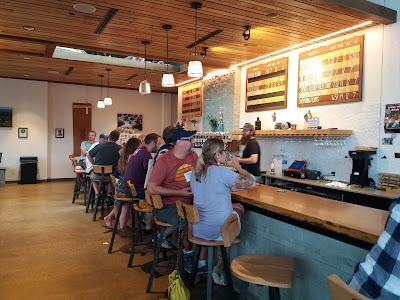 My first beer, the 7.6% Norse Pale Ale, fitted well with this theme, but the other two had more in common with the beers of the Low  Countries. Figue Rustique Saison 7.3%, a reddish-gold saison, conditioned on fig purée and Sugarbear Quad, a dark, Belgian abbey-style Quadrupel beer, dominated by dark chocolate and vanilla flavours, was a good beer to finish on, but given its strength of 12.1% ABV, it was a good job I shared this beer with another member of our group. 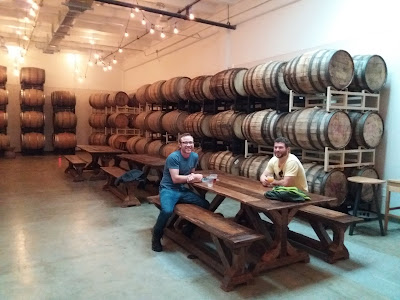 After a chat with one of the barmaids, a couple of us were allowed behind the scenes to see the brewery’s barrel-aging facility. There were several racks of wooden casks, all filled with maturing beer, indicating that a lot of both beer and money is being tied up here. The same applies to the Väsen Brewing site as a whole.

After  Väsen, it was back on the bus and off to our last port of call. This was a multi-brewery reception and tasting at The Answer and Mekong Restaurant. These two establishments are owned by An Bui, a Vietnamese former chef, who developed a passion for craft beer  whilst working at his family-owned restaurant, Mekong. 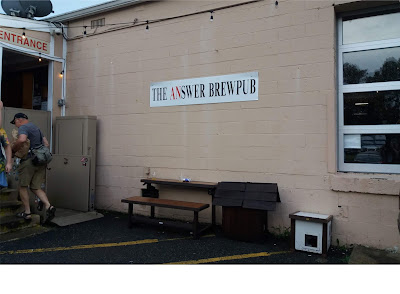 Founded in 1995, Mekong flourished into an award-winning spot for beer enthusiasts because of its wide variety of rare and international beers and expansive food menu. In September 2014, Bui took things a step further by opening The Answer Brewpub, his very own craft brewery, sited behind the restaurant. Featuring 56 taps, 2 bars, and a stage area for live music, The Answer is a welcome addition to the local beer scene in Richmond.

I must admit I was feeling rather “beered-out” by this time. I’ve looked through all the paperwork and leaflets which I brought back with me, and have been unable to find any notes or lists of beers from The Answer, so can only assume that I stopped recording my consumption by that stage. 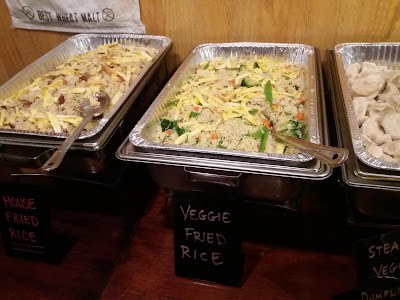 The food though was a different matter, as an extensive and very welcome Vietnamese buffet had been laid on for us. The photos show just how much food had been made available to us, but what they don’t convey is just how good it all tasted. The chicken Spring Rolls, rank amongst the finest I have eaten whilst  the string beans with noodles  and the sweet and sour fried pork were also of the highest quality.

Before leaving, we nipped round to the Mekong Restaurant, at he front of the complex. It was packed out with diners, all enjoying the excellent food, but there were quite a few beers on tap as well. Again I have no record of what or how much beer I drunk, but I’m certain it was pretty minimal. I was well aware that I had a train to catch, back to Washington, the following morning and the last thing I wanted was to either miss it, or to be travelling with a hangover. 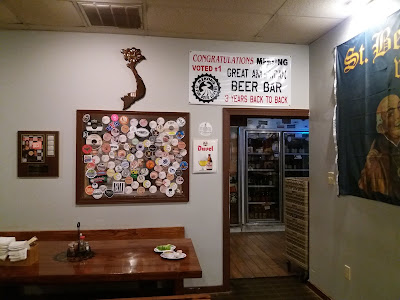 I shared a Lyft taxi back to the hotel with a couple of fellow beer writers. The coach was no longer available, so Visit Richmond had given us all some credit to use with this “on-demand” , app-based, taxi service, which operates in much the same way as Uber. I was glad not to be travelling on my own, as the journey back seemed to take quite a long time, and took us onto the local freeway. I didn’t recall travelling that route on the outward journey, but eventually we reached central Richmond and our comfortable and well-appointed hotel.

So a special thank-you to Owen and Charles for letting me share the ride back with you, and a huge thank-you to Erin and Meghan at Visit Richmond for organising such an excellent tour of some of Richmond’s finest breweries.

"the tourist authority responsible for promoting the former Confederate capital to the outside world. "

"but the heavens opened whilst we were on our way and we had to sprint the last couple of hundred yards."

Shades of my brother and I going for a 20 minute walk to meet his friends at a bar in Brampton, Ontario back in May. The rain came down so hard we turned back and had to change clothes! The ink from my wallet in my back pocket ran into my jeans.
(but kudos on deciding not to "swamp" Väsen Brewing Co.) :)

"We had been told to war our conference badges, as these would ensure that any beers we ordered would go on the Richmond Region Tourism tab,"

"but give its strength of 12.1% ABV, it was a good job I shared this beer with another member of our group."

Yowza. Oh, and I like how the 'AN' in 'THE ANSWER BREWPUB" banner going in is in red; to indicate his name, An. :)

"whilst the string beans with noodles and the sweet and sour fried pork were also of the highest quality."

Combined with the beer, I would've been in heaven.

"which operates in much the same way as Uber."

"and a huge thank-you to Erin and Meghan at Visit Richmond for organising such an excellent tour of some of Richmond’s finest breweries."

Seems to be making a comeback?

Typo's corrected thanks, Russ. Zephyr Adventures, who are the people behind the Beer Writer's Conferences, came to similar arrangements with tourist agencies, with two of the European events I attended.

Following the 2015 conference in Brussels, Visit Flanders did an excellent job in looking after those of us who'd booked a place on the post-conference excursion, and the following year, Visit Brabant did the same, with a pre-conference event in the southern Netherlands; prior to the Amsterdam gathering.

ETU, I don't think Barley Wine ever went away, but it certainly became un-fashionable and fell out out of favour.

Sorry, Paul. I meant that these very strong ales, popular in the US - and increasingly here - and barley wine, are in essence the same thing.

Yes ETU, these types of very strong ales are essentially the same thing, but for some reason, the term "barley wine" seems to have fallen out of favour on both sides of the Atlantic – although I don’t think it was ever commonly used in North America.

They are fine on a cold winter’s day, preferably whilst in an old country pub, sat in front of a roaring fire. I’m not so sure about drinking them chilled to the nines, in a North American bar though!

They used the one-word term "barleywine", since calling it "wine" would have had adverse duty implications, I read.