As promised, here's a resume of last night's outing to Tunbridge Wells

I met up with Eric at Tonbridge station where we were also joined by Jon. We made the short train journey to TunbridgeWells and then had a leisurely walk, up the hill, to the Royal Oak. We found the pub packed, and although we could have found a seat, it was rather warm inside so, feeling a little flushed after our walk up from the station, decided to sit out on the terrace in front of the pub - after ordering our drinks of course!

As I probably mentioned in my precious post, the Royal Oak was holding a beer festival, and we soon discovered that the theme was London breweries. It was a "rolling festival", which meant not all the beers were available at any one time. Instead, fresh beers were put on sale as soon as the current ones sold out. This of course had the advantage of most of the beers being "cellar cool", although there were a couple served direct from casks perched up on the bar. These were protected by insulated jackets, which ensured that they too were kept at the correct temperature. 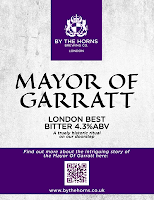 All the beers, and indeed some of the breweries, were new to me, but the knowledgeable staff were able to issue guidelines as to the style, taste and appearance of each beer - other outlets, please take note! We all started with Mayor of Garratt, a 4.3% Best Bitter from By the Horns Brewery. We all agreed that this was an excellent example of a proper London Best Bitter, and for me this beer was the best of the evening. Two of us then moved on to Orchid, a 3.6% dark mild from East London Brewery. The barmaid was quite right when she advised it had liquorice and vanilla notes, and it certainly was another excellent beer. For our third, and final beer at the Oak, my colleagues chose Diamond Geezer, a 4.9% strong bitter, again from .By the Horns Brewery. I opted for Notting Hill Ruby Rye from Moncada Brewery, brewed as its name suggests with a portion of rye. Normally I steer clear of "red ales", but I have to say this one was certainly very pleasant, and didn't taste as strong as its 5.2% strength might have suggested.

We made this our final pint last at the Royal Oak. It was getting chilly outside, and the pub was becoming more and more crowded inside. The band had started up, and whilst all three of us appreciate live music, we really wanted to chat. Besides, we were hoping to meet up with our friends Iain and Carole. We assumed they would be in the Grove Tavern, so we made our way through the back streets to the Little Mount Sion area of Tunbridge Wells.

They weren't in the pub, but no matter, there was Harvey's Best and Olympia, plus Taylor's Landlod to tempt us to stay. We all went for the Landlord, which was in fine form, in fact I would sat the beer seems to have returned to something approaching its old best. There was talk of moving on to the Compasses, over the road, but we were comfortable where we were, and it wasn't that long before we would need to depart anyway to catch the last train home. A second, and final pint of Landlord was duly called for before we strolled back down the hill to the station, in plenty of time for our train.

Once again another good night over at the Wells; it's just a pity we don't have pubs of this calibre in Tonbridge.
Posted by Paul Bailey at 21:22